Who would have thought Chelsea would be hosting Atletico Madrid in the Champions League group stages, and the press would be viewing it as somewhat of a relief for the hosts. Wasn't this side supposed to be the Blues' main challengers in Group D?

That's just how bad Madrid have been thus far this season. To put it in perspective, Atleti haven't started this poorly in 15 years. They don't have a win, or even a goal, yet in Group D. 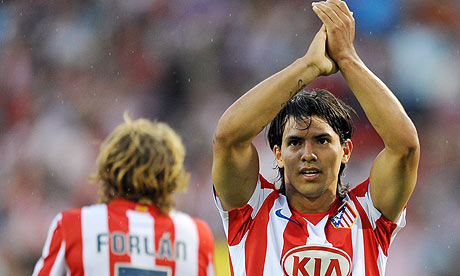 Should've been a Chelsea player in the summer.

And, to think, most of us were cursing the rivers at our set-piece frailties following the 2-1 defeat to Aston Villa on the weekend.

That, we've been told, has been worked out. Supposedly. Earlier in the week, Michael Ballack -- sorely missed in Saturday's defeat -- revealed that the players, along with CA, had held a "training-ground inquest" into our trouble on set pieces.

"We watched the game again at Cobham, we saw who made the mistakes – everyone knows that – and we've spoken about the game," said Ballack, who will return for Madrid's visit to Stamford Bridge. "We lost that game (at Villa) on set pieces. Everyone has to improve his movement, his defensive organisation in the box, and it comes down to personal attitude: 'Don't concede a goal.' We can train and practise things but, if someone falls asleep at a set piece, we will still concede."

Sure. But didn't we have this problem last season under Scolari, too? Lets hope CA is, in fact, nothing like the bulging Brazilian and can rectify this sooner rather than later.

Regardless, Atletico should not offer much in the form of lethalness from free kicks and the like. Of course, you never know in football -- see Rubin Kazan at Barcelona. They also got a kid name Kun. And an English reject named Diego, who ain't half bad, either.

Nevertheless, we shouldn't have a problem finding the net against a Madrid side that has conceded 17 goals in seven matches. Yikes. No Drogba (suspended) will help the Spanish side, but I can't see that number not increasing at the Bridge.

Match Facts
-Chelsea have not lost in their last 19 Champions League games at Stamford Bridge. The Blues have are unbeaten in 10 CL matches overall.
-Petr Cech will likely earn his 50th CL cap for Chelsea.
-Atletico have drawn six of thier last eight CL games. They have failed to scored in their last three.
-The Spanish club has lost on only two of its seven trips to England.