Share All sharing options for: Transfer Central: The Lowdown

The silly season has started, and I've yet to touch on what Chelsea won't do in the window. So, let's take a look at potential targets, potential exits and what we'll actually get this January (absolutely nil). 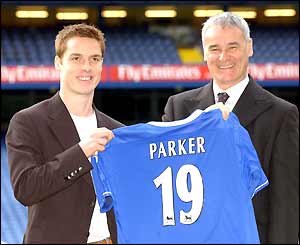 --Rumored Targets--
Luis Fabiano
Striker, Sevilla
Price: 15-20mil
The 28-year-old Brazilian has been linked with Chelsea since August. Valued at 20mil, and known to be more of a nutcase than Drogba, Fabiano would be a egregious risky buy. Plus, the guy is having a pretty poor season -- 12 games, 3 goals, 2 assists. We could do a lot better. Still, he's Brazilian and Phil seems to have an affection for him. Let's hope for a pass.
Likelihood of joining: 5

Hatem Ben-Arfa
Winger, Marseille
Price: 10m
Speaking of malevolent attitudes. This 21-year-old winger joined Marseille just this offseason after a falling out with club officials at Lyon. However, his upside cannot be ignored. Arguably a bigger prospect than Karim Benzema during their early years at Lyon, Ben-Arfa is quick and, technically, vastly superior to what we have. However, he's certainly not overly strong but probably could cope in England better than, say, Deco has. He's yet to impress for Marseille, although he did put in a great shift against Lyon earlier this season. I doubt there's any merit in this rumor, but it would be at least a small step in the right direction.
Likelihood of joining: 3

Yuri Zhirkov
Winger/fullback, CKSA Moscow
Price: 10m?
Replacing Bridge with Zhirkov would be a great piece of business for the club. The "Russian Ronaldinho" has bags of energy, great ball skills and touch, and can play at either left-back or winger. Oh, and he's only 25. Barcelona and Juventus are among those supposedly interested, but it looks as if Chelsea -- if willing -- are in the driving seat.
Likelihood of joining: 7

Cicinho
Left-back, AS Roma
Price: 5m + Malouda
So, we need width and this is the only guy the tabloids could come up with? If that's not enough, look at the offer: five million -- and Malouda??? Get real.
Likelihood of joining: 1

Michael Owen
Striker Newcastle
Price: 4m
Owen's contract is up at the end of the year. He's been slow to re-up with Newcastle, while the Magpies have been equally slow in extending Owen's no doubt astronomical salary. A host of clubs have been linked to a move for the England international, including Liverpool, Inter Milan(!?) and Juventus(!?). As injury prone as Owen has been over the past five years, this is the definition of a high-risk deal. However, if we can't find any other option a short-term contract could work in our favor. Who knows?
Likelihood of joining: 5

Andrei Arshavin
Forward, Zenit St. Petersburg
Price: 15m
The pint-sized Russian has been on our radar for some time, but looks unlikely to join this window thanks to interest from the likes of Arsenal and Juventus. Being cup-tied for the CL is also a major turnoff. A talented forward who could assume the linkup role that Eidur Gudjohnsen absolutely ruled for us, he would be a solid in. I just don't think it will happen.
Likelihood of joining: 6

David Villa
Striker, Valencia
Price: 30-plus mil
We all know about this guy. And we know how much Valencia want for him. And we know Manchester City is interested. Let's leave it at that.
Likelihood of joining: 2

Adriano
Striker, Inter Milan
Price: Swap with Drogba, loan
This thing has been dangling since last january. A swap deal is insane and, while a loan could work, I doubt it would. At 26, the Brazilian still has some juice left. But what's to say he's emotionally stable? I just don't know about this one.
Likelihood of joining: 5

Ezequiel Lavezzi
Striker, Napoli
Price: 15-20mil
The young Argentinian's name continues to pop up alongside Chelsea in the tabloids. It's nonsense. Napoli president Aurelio De Laurentiis has repeatedly dismissed the link. He recently quoted as saying, "We are not interested in money." We shall see. Real Madrid is supposedly lining up a €40m offer.
Likelihood of joining: 1

Valon Behrami
Midfielder, West Ham
Price: 8m
Wait, what? Yes, you are reading this correctly. According to Behrami's agent, we have lodged a bid for the 23-year-old who impressed at Euro 2008 for Switzerland. I've got nothing else to say about this one.
Likelihood of joining: 3

Giovanni Dos Santos
Forward, Tottenham
Price: 6-8m
Yes, his name hasn't surfaced with regard to us. But we know is he hasn't seen any action under Harry Redknapp and can't be happy about it. He's clearly still got talent, so why not take a punt?
Likelihood of joining: 2

Alex
Destination: AC Milan, PSV, Manchester City
Deal: none
Price: 10-12m
We all saw Alex's comments in The Sun. Yeah, it was The Sun. But the story clearly has some merit. If the big man wants to leave, I think we have to consider letting the man leave. We've got proper cover at centerhalf, and though he's been pretty solid when called up, he's got no real chance of gaining a first-team place at Chelsea right now. Of course I'd prefer it if he hung around. Anyway. Since we paid a dollar for him, I'd say 10-12m is a good turnaround.

Florent Malouda
Destination: AS Roma, Bayern Munich
Deal: none
Price: 8-13mil
Flo started the season quite well if you ask me. Now, he can't even get a substitute appearance. It's no secret the former Lyon star has struggled mightily in the Premier League and, if the right deal were to come across Big Pete's desk, I say let the man leave.

Branislav Ivanovic
Destination: Fiorentina, AC Milan
Deal: none
Price: 9-12mil
I don't want to believe the rumors regarding Ivanovic. However, I wouldn't be surprised if Chelsea let him go. It makes sense, really. Bran has been quality this season considering how long he was forced to wait before getting a run in the team. I'd hope Pete & Co. are smart enough to see that.

--Who Chelsea Will Get--
Zhirkov. And a striker none of us saw coming. Another underwhelming window for the Blues. Hey, at least we'll keep one of Alex and Ivanovic. Let's just hope the word is true and we go big in the summer. At least then I'll be fine with a bum window. Still, though, that's a big if.

Let me know what you guys think? Who will we bring in? Anybody at all? If you've got any names I failed to mention, add 'em.