Who is Marco Storari and why are we signing him?

Share All sharing options for: Who is Marco Storari and why are we signing him?

But we go right out and sign a 32-year-old on-loan backup? I'm confused. 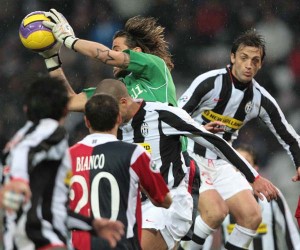 Chelsea have wasted little time in tying up a replacement for Carlo, eyeing up Marco Storari, currently on loan from AC Milan at Fiorentina. First, Storari doesn't even start for Fiorentina. Second, if he's not good enough to challenge the likes of Kalac, Dida, etc. at Milan, then why are we chasing him? Seriously, how bad do you have to be to get sent on loan over Dida? My word.

Third, and most important, what the hell is wrong Hilario? In my opinion, Hilarious has filled in quite admirably when called upon. So why bring in another 30-plus keeper? Can't Rhys Taylor be third choice? This is baffling.

More terrible business from Chelsea. Oh, and there's more. Apparently, the Blues have delayed the deal, instead asking for five DVDs of Storari in action before making a final decision. Are you kidding me? Busch league.