The Bridge is Over

Share All sharing options for: The Bridge is Over

Well, it looks as if Chelsea and England left-back Wayne Bridge has finally moved on.

After seasons upon seasons in which it seemed like Bridge would undoubtedly leave Stamford Bridge -- and did not -- the 28-year-old is set to join the Manchester City "revolution" for a fee believed to be 12 million pounds. 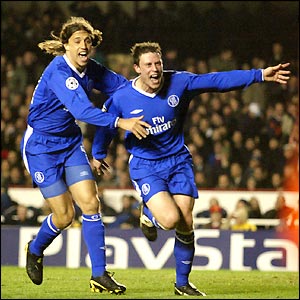 Personal terms have yet to be agreed upon, but that should be a formality. Bridge has been a great servant to Chelsea, never once -- if I remember -- speaking out about a lack of playing time or preaching for a move. When he did play, he was always dependable and fairly durable at the back.

Remember when Mourinho loaned him to Fulham? Even during that spell, he didn't complain, came back and actually excelled for us. Bridgey will always be remembered for that delicious winner against Arsenal at Highbury in the 2004 Champions League quarters. I mean, how ridiculous was that? Oh, that goal also broke an 18-game winless skid against the Gunners. No big deal, right? Riiiiight.

Then there's this beaut against Portsmouth, complete with one of the great celebrations of all time...

So I wish Wayne the best of luck at City. And that 12mil? Well, we'll take that and run.