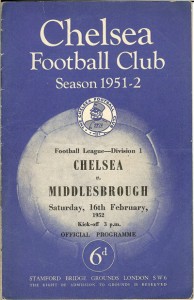 This, my friends, is the definition of a trap game.

Five days from a most massive match at Anfield against Liverpool, our Chelsea welcomes Middlesbrough to Stamford Bridge. Of course, it's Boro who have traditionally played us well.

This will be no easy task. Especially with the way we're playing. We conceded from a set piece for, what, the 20th match in a row against Ipswich at the weekend. When's the last time we kept a clean sheet? I'm too lazy to look it up.

More great news. Ricky Carvalho is out once again with injury, this time a hamstring strain. At least EBJT is back in the fold. Any chance of seeing some of those promising youngstas? I doubt it. I mean, what the hell Phil? You give 'em a run out against Stoke, they perform, then you just drop them for Ipswich? Wack, son.

Luckily, Boro is struggling mightily in the Prem. Gareth Southgate's side has taken the wonderful total of one point from 15 over the past five matches. Yikes. And to think, I thought this club had a chance to finish in the top half.

Anyway, leave me something good before and after the match right here. And feel free to discuss our fallacies during the match, too.