Say it ain't so, Carlo

Share All sharing options for: Say it ain't so, Carlo 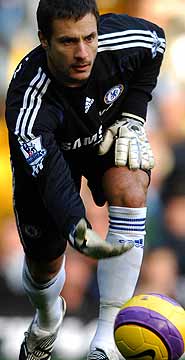 One of the last remnants of the pre-Roman era of Chelsea has finally moved on.

Goalkeeper Carlo Cudicini agreed a move today to Tottenham on a free transfer. It was a move that many of us assumed would happen each season for the past three. However, it never did -- as Carlo's loyatly to the Blues continued to shine.

Now it seems as if his thirst for first-team football has finally won out. One can't help but thank him dearly for his dedication and service to the club, which was at times marvelling. Carlo, at 35, was out of contract at the end of the season and was no doubt going to move on from Chelsea. But that doesn't take away from the shock of the departure.

A couple of quotes on Carlo's move via the official Web page.

Luiz Felipe Scolari said: "I am pleased for Carlo that with this move he will now have more opportunities to play more games as he is a fantastic goalkeeper. I wish him all the very best at his new club."

PK added: "Carlo has been an outstanding player for Chelsea for almost 10 years and his service during that time has been excellent. We appreciate this move offered him the possibility of more first team football and we wish him all the very best as he moves on. Carlo will always be warmly welcomed back to Stamford Bridge."

What did he have, a 50 percent rate of saving penalty kicks? Are you kidding me? That's off the charts. In all, Cudi made 210 starts for Chelsea.

Despite joining that trash up the road, we wish you the best Carlo. I'm looking forward to you returning to the club after you retire, as there's no doubt a coaching job is in your future.

Below is a highlight package of the man. For those new fans who only know of Cech, pay close attention -- especially to that stunning stop on Van Nistlerooy's volley. Top draw my friends.