Didier Drogba has been told to stay home.

And we're back to man-to-man marking on set pieces -- or so says Uncle Phil.

Things are looking up I'd say. 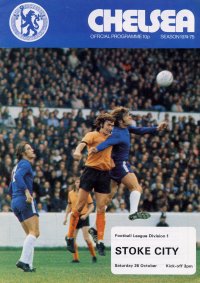 The world's finest set piece team will be in the building today, with Stoke visiting Stamford Bridge this morning. Drogba has been left out of the team for the second consecutive match, fueling speculation he may just be on his way out this January window (buh-bye). Injuries to Deco (short-term) and Joey Cole (long-term) have weakened the Chelsea squad just went it looked as if full-strength was a possibility.

Salomon Kalou, whose display at Southend will no doubt have many mouths watering, will likely slot into Joey's place and promptly disappear. Also, we can only hope that Michael Ballack's goal against Southend will spark his season, one which has, to this point, been utterly terrible.

James Beattie will be making his debut for the Potters, and will once again fail to justify a pricey transfer fee. Rory Delap, however, will clearly cause us trouble. Let's just hope he throws his shoulder out.

Anyway, keep me up on all your latest news and views before, during and after the match right here. Cheers.