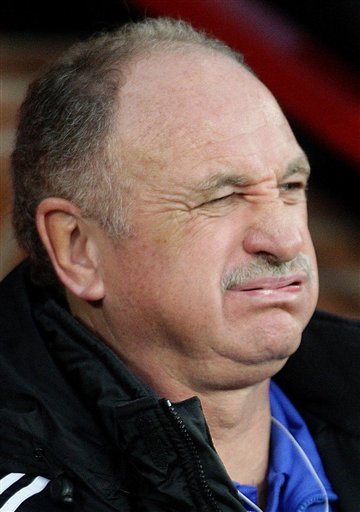 --To Sky Sports--
"We didn't have many good chances and in the last minute of the first half we conceded a goal that changed everything. In the second half they played more freely and we gave them space which they like because we had to go for it."""I think it’s done big damage, very big damage [to our confidence] because we didn’t come here to play for this situation. We thought about winning the game now we need to think about what happened with some players, what happened with some set-plays, because we need to change something in the future."

--To Chelsea official web site--
On Vidic's first-half goal: "We conceded a goal that changed the game because after this goal they played more free. We tried to put more players in front and gave them the space they wanted to play. They are better than us in that time and scored one more goal by foul. It is one more mistake and in that time sure, 45 minutes they played very well, better than us. It leaves United right just a point behind us in the table, with two games in hand to play in the coming weeks.

Asked whether Sir Alex Ferguson's side should now be counted as favorites for the championship, Scolari responded after some consideration: "I don't know if I win or not win, we have 16, 17 games, and who knows what happens. If we play as today, as [the last] three or four games, sure, we will not win.

"But now is the time for me and the players, to be thinking about the future. We lose everything, or we are men and we regroup. This is the time, it is only this way. The second way is dead. I am not a man for this and my players I think are not the men for this. They try after today thinking about what has happened the last four or five games, thinking about the future, about us, and the next game maybe we play better than the last four or five and we start again to win, and arrive in a very good position.

"'We don't know if the other teams will not lose, in England you never know. If you play first against 18th or 19th, you don't know. But sure, we know, the fans know and the press know, if we play as the second [half], we will not arrive, sure."

On Drogba and adding to the squad in the window: "I think Didier [Drogba] is in good condition and I believe in Didier as a number nine. I put him in for one game, two games. I know that more players do not arrive, I don't want more players. I have very good players, and this is my squad, finished.

"I try to give more opportunities [to Di Santo], he came to the pitch and played well, today I put him on because he is one player I need to give opportunities."