Chelsea TV sat down with Didier Drogba for a candid interview and the official Web site has some tidbits from it. Ze Drogs speaks on all sorts of fun, including his transfer demands, unhappiness, vagina, favorite hair straightener, etc. Check it out, son.

On how not winning a trophy last season aided in his decision to stay in London: 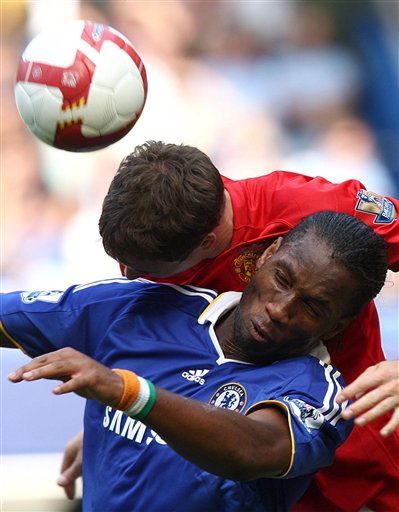 'In November when I made an article saying I wanted to leave, I had my reasons when I was saying that,' Drogba recalled during the interview. It didn't change anything in terms of the way I was playing. It was a boost for me to speak and say what I was feeling because I needed to do it and I think everybody understood what I was trying to say, and respected me for what I said.

'After that I gave everything I could, because playing injured is not easy and I did it, so nobody can say this guy was not part of the club's future or life. Then came the end of the season and a lot of speculation, and because of this article everybody said I was going to leave.

'It was in my head but at the same time, to lose the Champions League Final, to leave the club without winning anything [that season], and since I am here I created a fantastic relationship with some players. My family is happy here, I am happy in London.

'It has been two years when we don't touch the [Premier League] trophy. You realise what we did two years before was fantastic and amazing and you want to win the League again. But the Champions League is I think for this season one of the main objectives.'

On the Champions League final, hitting the post and the infamous red card that followed:
'When it hit the post I was really down because I didn't have a lot of chances so if I can call it a chance, that was a good try,' he said. 'The second half was fantastic. Manchester United played well and when they scored, we started to play and equalised with fantastic movement. The second half was Chelsea. We dominated the game but couldn't score.'

'I think I was frustrated because of the way the game was going and I was emotional,' he admits about the flick at Nemanja Vidic that precipitated the red card. 'How can you not be emotional in this kind of game? Of course this is something I shouldn't have done but I think it was made more than it was. I don't think it was a red card, maybe a yellow. I went to the dressing room, praying my friends could do it.'

'I was really disappointed, maybe some people didn't understand. I was disappointed not to be in the penalty shootout. It is more difficult than seeing the red card, to leave the pitch like this, especially in front of our fans. That was for me a big chance to win the Champions League.'

On his troublesome first year in England:
'First of all I think I did well because when you are like a king in a club and you have to leave it to go to another team where there is 21 kings, it is difficult because everybody has an ego and you are proud,' he further reflected during the Chelsea TV interview.

'Your ego is affected, and that's normal, that's life and how you improve in life. Only people that don't want to see the truth stay behind and then they don't progress.

'I said in the book I wasn't happy when I first came, I was thinking the fans didn't know me, and now I understand I maybe wasn't giving the best of what they were expecting. You have to be open for the critics and learn from it, and take the best out of it.

'This guy [Mourinho] believed in me and with Roman [Abramovich], they did everything to make me come here to Chelsea. When a manager comes and says this is the player I want, not another striker and when you have difficulties like I had, he was always protecting me.

'If you have a little bit of respect and emotion and heart, you would be sad if he leaves.

'People say I was shocked like the world was ended, and it was really difficult because when you adapt to a certain way of training with people and see them every day for four years, you get close to them, know their family, that's all it was. It was sad.

'The most difficult time was at first, because I was still injured and it was difficult for me to start again. The players helped me a lot, saying to me they need me to play. I say thanks to them, that's why I am a team player. In this kind of moment I really say thank you.'

On the ongoing knee problem that has plagued him for more than a year:
'Last year was more difficult because I didn't take the normal time to recover from the operation,' he admitted, 'but when I went for the Cup in Ghana I felt good, no swelling, so I said I was fit again.

'Then I came back here and my knee started to swell like I have never seen, and I played three months like this, try to reduce the swelling, play, rest.

'That's why I didn't go for pre-season, I really wanted to take my time, think about rebuilding the muscles, getting fit and starting again.'

On new manager Luiz Felipe Scolari:
'He has got personality, he is a leader, and this is what Chelsea always need and what we have had in the past. I think we lost a little bit during a certain period because some managers have more personality than the others.

'To win titles you need a leader and the leader has to be the manager because the teams always follow him. Mourinho, Ranieri, Gullit, Chelsea always had a leader, that's what we have now and we are back on our winning track.

'The team is good, we started winning so I think we can go far.

The Big Interview - Didier Drogba, where the man will expand further on the above and more can be seen on Chelsea TV today at 5.30pm, 8.15pm and 11pm, and tomorrow 10am and 8pm.