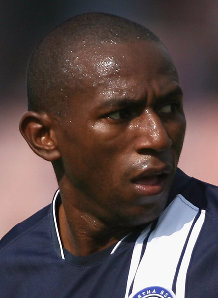 Well, neither of you got your wish. This week, Chelsea completed the signing of free agent Brazilian Mineiro. The 33-year-old, who has 24 caps for his country, most recently had a spell in Germany with Hertha Berlin.

Uncle Phil is certainly pleased with the signing of Mineiro, who has signed on until the end of the season. Philly went as far as to compare him to Chelsea legend Claude Makelele, who left for PSG in the summer.

"I have told Chelsea supporters that Mineiro reminds me very much Claude Makelele," he told Terra Brazil. "He knows very well what to on the pitch and is a good central defender.

High praise indeed. While I'm cool with the signing, I do hope this does not mean John Obi-Mikel will be relegated from an automatic first-teamer. Right now, with the way he's playing, he deserves that title.

As for Mineiro, he does have at least one thing going for him. The man scored a wonder goal against Liverpool in the 2005 FIFA World Club Championship while playing for Sao Paulo. Let's hope he's got some more of that left in the tank.