Butch back at the Bridge

Share All sharing options for: Butch back at the Bridge 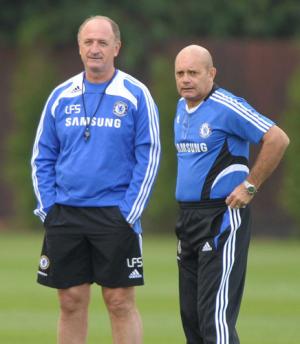 Thank you Pete Kenyon! In a pretty surprising move, Chelsea have brought Ray Wilkins back to the club as assistant first-team coach.

Wilkins joined Chelsea as a player nearly 35 years ago, eventually becoming the Blues' youngest ever captain at 18. He spent six years at the club before leaving for -- dare I say it -- Manchester United. He earned 83 caps for England, before turning to coaching. This will be his second spell in management at Chelsea; he worked under Gianluca Vialli from 1998-2000.

From the Independent: "Wilkins has also forged strong links with Chelsea. He is often see at the club's academy and training ground and captains the Chelsea Old Boys team in charity matches as well as being a trustee of the Chelsea Past Players' Trust. Although such things may not be regarded as important factors when it comes to coaching a Premier League club, they have helped Wilkins develop his contacts at Chelsea. At the same time, the club's owner, Roman Abramovich, has embraced the club's heritage and former players, inviting back many who felt estranged under the former chairman Ken Bates."

The above really lets you know how fantastic of an appointment this really is. By losing Steve Clarke, Scolari's staff, in a sense, lost a key link between itself and the players. Bringing in a guy like Wilkins, who knows the club, the players, the history, will almost certainly re-establish that link.

Here's what Wilkins had to say regarding his role at Chelsea this time around:

"I was on the pitch a lot more as a coach when I was with Luca. I think I will probably be helping Felipe more with background work, preparing team talks, preparing videos, or should I say DVDs these days. So I will be preparing those on set-pieces, how the opposition play, that type of thing.

I'll deal with a little bit of media as well because it is amazing how tired you can get when you are learning a new language. I can remember that many years ago when I was in Italy, I was trying to speak the language at the club and would go home mentally exhausted. And when you are manager of a big club like Chelsea, it is hard enough getting the team in the right shape, let alone dealing with everything outside of it. So whatever he wants me to do, I will be happy to do it."

Interesting enough. I think he'll be involved a little more, but only time will tell. Regardless, I like this appointment and look forward to seeing how it plays out.