Share All sharing options for: How John Terry escaped a red-card ban

According to barrister Jim Sturman, via The Times ...

"Some people are raging about this, but, as usual, based on a complete misunderstanding," Sturman said. "It is all in the relevant section of The FA handbook, which you can download from the internet, on wrongful dismissal appeals. 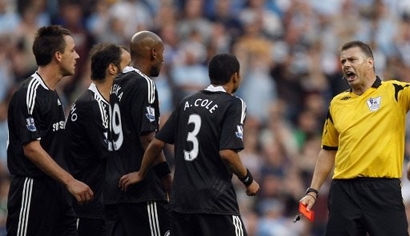 "Clubs have to notify the FA on the first working day after the match of an intention to appeal. The next day, by midday, you have to send the claim for wrongful dismissal. The procedure is that you put the claim in with the video and a letter which contains your submissions as to why the dismissal is wrong. The submissions can be very, very detailed.

"The burden is on the player and his club, under rule 5 a), to 'demonstrate to the Association that the dismissal was wrongful.' So it's not a question of downgrading a red card to a yellow one. That's a total misconception based on what some consider was the law from years ago.

"What is a 'wrongful dismissal' has been, in the past, a source of some controversy, because the FA have to be persuaded that there is a 'clear and obvious error' in the [referee's] decision. It would be nothing to do with Keith Hackett. He does not make any observations whatsoever and he is not on the regulatory commission.

"The commission normally comprises one of the chairmen of the disciplinary panel plus two, three or four others, including a football representative. So you could have Gary Mabbutt, Robbie Earle, David Pleat, Graham Taylor - it is quite a broad church.

"There are no personal hearings in such cases anymore - the right to a hearing was abolished some years ago, because there were long delays - so I don't appear in person. I draft a letter. I drafted Chelsea's letter along with David Barnard [Chelsea's much-respected club secretary]. The disciplinary commission considers the referee's report, the reports of any other match official and any other evidence that supports the match referee, statements, video and any other evidence provided in support of a wrongful dismissal - so you can put in reports from the match assessor, players, the manager, even the opposition manager.

"The commission then looks at the evidence, and then decides whether the claim is rejected or upheld. The ONLY question that it considers, under rule 5 c), is the issue of whether any sanction of a suspension from play should be imposed in the light of all of the facts of the case. Their role is not to usurp the role of the referee, and the dismissal from the field of play remains on the record of the club and the player.

"The card is not downgraded from a red to a yellow. The red card remains on your record, and it is factored into a club punishment for a bad disciplinary record, but the commission decides that the sending off is sufficient punishment.

"Law 12 of the laws of the game defines what serious foul play is. The commission is entitled to uphold the claim of wrongful dismissal. Whether referees change their mind is not relevant.

"Of course, if the commission rejects a claim, they could consider that the claim was frivolous. For instance, Jeremie Aliadiere of Middlesbrough contested a red card last season but if he admitted he had raised his hand to an opponent's face, the rule is quite clear that that is a sending-off offence. The commission do not have the discretion to say 'Well, you didn't hit him very hard.' When the rule is clear and a player has no grounds for appeal, they can impose a sanction up to double the penalty."