Share All sharing options for: The bid is in ...

"Further to media reports, Chelsea Football Club can confirm we have made an offer to Real Madrid today (Thursday, August 7) for the transfer of Robinho."

Says a statement on the official Chelsea FC website. Short and sweet, eh? This ordeal, however, is certain to be anything but.

So we finally lodged a bid for the pint-sized Brazilian so true to Uncle Phil's heart. The number being thrown around by much of the media is £19.7million. What happened to all that talk about 40-plus mil? Oh yeah, it's the media. 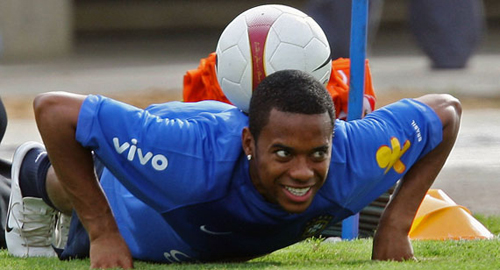 If the suits think they can pry Robinho away from Real Madrid for less than 20mil, they're crazy. It's going to take upwards of 30 (I say 28) to get the 24-year-old to London. Is he worth it? Who knows.

What you, me and every other Chelsea supporter does know is that we need some cover up front. With Drogs' health deteriorating by the minute, the future of Sheva man still up in the air and Di Santo yet to reach puberty that leaves the lovely Blues with just a Sulk left to do the business early on. I know Nico has been showing the swagger in preseason, but who couldn't have slipped four by that AC MIlan squad? Jokes. I'm actually backing Anelka for big things this season.

Still, we need some more beef in attack and Robinho is certainly a viable option. Uncle Phil has made no secret of his desire to work with little Robinho again. So, conclusion? While I'm sure 19.7mil is just an appetizer, I doubt we'll see this saga end any time soon.