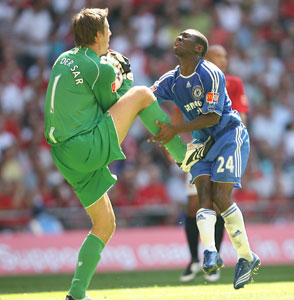 SWP completed a £9 million move to the club he left for Chelsea, Manchester City, this week. According to the Gurdian, his father, Ian Wright, said it was the first time his son had smiled in ages.

Well, don't blame Chelsea pal. It's not our fault your boy has no sense or idea of how to play the game. Whatever.

Shaun's move trims even more fat from the Chelsea squad, one that has already moved plenty of deadweight this summer (Ben-Haim, Pizarro, Siddy, more to come?). However, with the Robinho deal now in tatters, we look a bit stretched on the flanks. Let's hope management have a backup plan, like they did when we failed to land Dani Alves last summer.

Here's some video of SWP discussing his move to City. Well, if you can't call this discussing.