Transfer news: Who the hell is Fabio Paim?

Share All sharing options for: Transfer news: Who the hell is Fabio Paim? 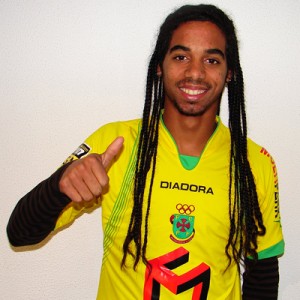 He's the next Ronaldinho (without all the weight).

He also bears a strong resemblance to Jar Jar Binks. But I digress.

Paim's a winger. A flashy one. He's got "bags of pace," and "uncanny" ball control. All this and he can't even break into his own club's first team? Sounds fishy.

It's apparently not fishy to Uncle Phil, who pushed through a season-long loan deal for the 20-year-old Portugese prospect early last week. An option to buy is attached.

On with the profile.

What we know for sure is that Paim (I assume pronounced pie-eem, as in Haim) is a product of the legendary Sporting Club de Portugal youth system -- yes, the same one that produced such fine gentleman as CRon7 and Ricardo Quaresma. At 15, he was considered the next coming, poised to be greater than either of the two aforementioned. What happened, then, you ask?

Well, injuries -- and a less than favorable attitude -- derailed his growth. Failing to gain even a glimpse of first-team football at Sporting, Paim was sent out on loan to three "less-than" Portugese clubs. He failed to impress at any of them, flushing his stock right down the toilet.

But -- and this is a big but -- Uncle Phil likes him. That's all that really matters, right? I mean, the guy has a track record with volatile players. If he's willing to give Paim a shot, so am I. Make it happen, young dude.

Is it 25 or 28 for Robinho?
A pair of fine papers are suggesting Uncle Phil's main Brazilian will be a Chelsea player by the morning. Both of them have a different fee attached. The Guardian is going with a cool 28.6mil. The Independent has other ideas, citing 25.5m as the magic number. Really, though, who cares as long as little Robby makes his way to London in time to skin Spurs?

SWP heading out the door
Everton and Manchester City are waiting in quene to land one Shaun Wright-Phillips. The erratic Chelsea winger, prone to going AWOL on many occasion, needs starts and he's certainly not going to get them at Stamford Bridge. The man can most likely be had for 9-12mil. I say, take it.

Mancienne to join Mallorca?
Michael Mancienne may be heading East. Chelsea's England Under-21 defender has been linked with a loan move to La Liga outfit Real Mallorca. Mancienne, 20, has spent the last two seasons at Queens Park Rangers, where he has excelled. However, a move to Spain -- for me, at least -- is a fantastic idea and would certainly do the lad a world of good. Make this happen Kenyon.

Cork joins Saints
Another highly-touted Chelsea defender has made a loan move. Jack Cork added his presence to the Southampton backline last week, on loan until Jan. 1. Cork, 19, can play across the backline and also as a defensive midfielder. He made 35 appearances, and scored twice, for Scunthorpe last season.