Share All sharing options for: Match recap: 3 points is 3 points

Well, that wasn't impressive now was it. Almost depressing really.

At least we know Uncle Phil can win ugly. 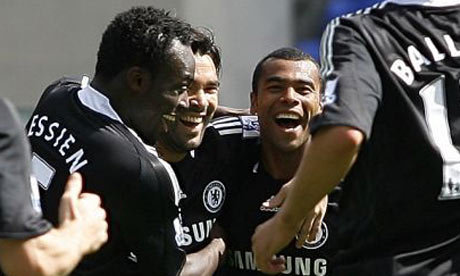 Chelsea flogged through a 1-0 win at Wigan Sunday, thanks to a sterling free kick from Deco early on. From thereon, it was a dire, slow performance from the Blues.

Wigan were really unlucky not to grab at least a point, Petr Cech making a handful of quality stops to preserve Chelsea's status at the top of the Premier League after Week 2. Deco struck in the third minute with an immaculate bender that caught goalkeeper Mike Pollitt -- replacing starter Chris Kirkland who was ruled out due to injury in the warmup -- out at his near post.

After Deco's spot of brilliance, the match became a stirring puddle of monotony. Neither team really upped the tempo, though Wigan -- particularly Egyptian striker Zaki -- caused problems. He had two strikes saved during the first half, and continued to batter JT and Ricky in the second. To be fair, though, Wigan never really looked like finding an equalizer and Chelsea were content to hold on.

Obi-Wan Mikel missed the match because of injury, and his absence was more glaring than one might have thought when they glanced at the teamsheet. Replaced by Michael Essien, it was the Ghanaian who struggled to find his way. It was obvious he had been rushed back, as there was no Bison to be found. He was distinctly off the pace, but so too were Lampard and Ballack. Joe Cole and Nicolas Anelka were mere spectators.

Much of our trouble stemmed from the aggressiveness and downright physicality Wigan possess in the middle of the park. Wilson Palacios and Luis Valencia showed the verve and committment that Chelsea lacked. In truth, a Blues side should never be trumped in the realm of physical prowess.

Regardless, it's three points gained -- a precious property in this league.