Share All sharing options for: Mitrovic glistens at Cobham Cup

Chelsea's Under-16 showcase, The Cobham Cup, kicked off today. And Marko Mitrovic stole the show. 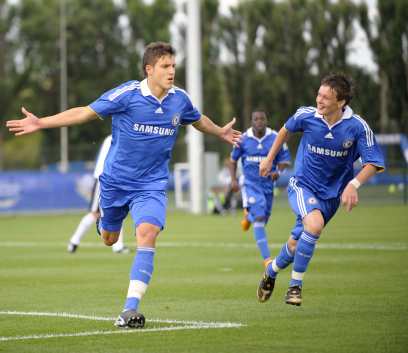 In his Chelsea debut, the highly-touted Swede -- signed by Chelsea last December -- found himself on the scoresheet less than a minute into the Blues' tournament opener with River Plate. Mitrovic drove home a penalty, which he had won by latching onto an errant loose ball just 10 seconds into the game. Mitrovic landed a second -- which turned out to be the match-winner -- later in the first half after River had equalized through Juan Montero's spot kick.

James Ashton fed Aziz Deen-Conteh, who in turn found Ashton in space. Ashton then found Mitrovic. Mitrovich played a neat one-two with Aliu "Kaby" Djalo, the later setting up Mitrovich for a exquisite finish just inside the near post. The Chelsea website described it as, "everything the club's coaches are striving to achieve."

River came close to levelling in the second half, but Chelsea held on for a quality win. Chelsea will face Suwon Blue Wings today. Winners will be determined after play on Monday. Suwon (Korea) and River join Ajax, Bayern Munich, FC Tolyatti (Russia), Al-Nejmeh Lebanon, and Disney’s Soccer Showcase All-Stars (U.S.) as participants in this year's tournament.

Under 14s also in action
Chelsea is also staging an Under-14 festival this weekend. The two-club tournament -- Dynamo Kyiv dropped out -- wrapped up today. In a two-game competition, the Blues emerged 3-1 winners over DFC Dnipro (Ukraine) on aggregate.