Drogba out until October?

Share All sharing options for: Drogba out until October? 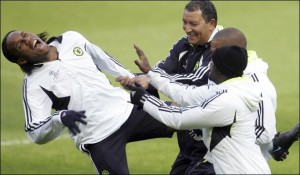 This is sure to be news to Scolari & Co.

Didier "I don't know what I want" Drogba, who missed Chelsea's opening match of the season with Porstmouth, looks to be out until October if Ivory Coast manager Vahid Halilhodzic is to be believed. Drogba was inclued in the coach's 22-man squad for the Coast's Wednesday friendly with Guinea, but was not used.

The coach spoke about why he decided not to unleash the Drogs after the Coast's 2-1 win.

"Drogba will not be back before a month, a month and a half," Halilhodzic said. "He has started to run but he will not be available for the match against Mozambique (September 5)."

Wait, what? Isn't Uncle Phil expecting Drogs back by the end of the month? Something's not adding up.

If there is any truth to what Halilhodzic is saying, it just underlines Chelsea's need for offensive reinforcement. I thought we needed a proven striker before this news; now, especially with the Robinho deal all but dead (or is it?), it's simply a necessity.

So, with that being said, who would you guys like to see come in? Let's be reasonable people, too, because as much as I'd love to see Kun in blue it's not going to happen this summer.