Sheva, it's been real

Share All sharing options for: Sheva, it's been real

Poor Andriy Shevchenko. His London nightmare is almost over -- for a season at least.

Various reports suggest Chelsea and AC MIlan are "close" to agreeing deal that would send the fleeting Ukranian back to his old home on a one-year loan. 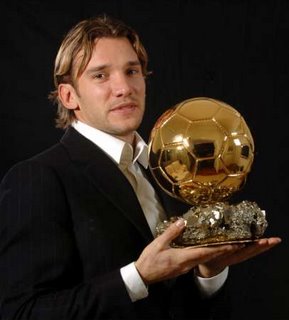 "We are close to the end of the deal and I hope that these little things that have to be fulfilled are done as soon as possible. I would be extremely delighted if Shevchenko returns to Milan and I am ready to embrace the Ukraine champion again, for us it's about a return home."

The Daily Mail goes one more, suggesting Chelsea have offered to pay part of Sheva's 5mil salary just to get him out of town. Wouldn't surprise me, really. His biggest proponent at Chelsea, Romes, appears to be the one pushing for a move -- he met with Milan president Silvio Berlusconi last week.

Not regarding Kaka? Boo.

Anyway, this is probably the best move for both parties. I have pushed for Sheva to get minutes for two seasons now, and have been promptly shot down by first, a incompetent manager, and second, a World Cup winning manager. The man deserves a fresh chance to shine. Good luck to the Sheva in Milan -- if, in fact, he does leave. He has been a wonderful professional at Chelsea, and deserves success wherever he winds up.