Match Recap: Throwing down the gauntlet

Share All sharing options for: Match Recap: Throwing down the gauntlet 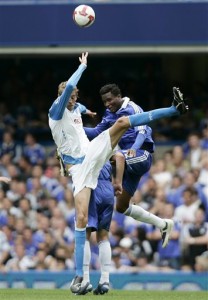 So much for settling in.

Uncle Phil set Stamford Bridge ablaze on his debut, guiding Chelsea to a superlative 4-0 win over Portsmouth in the Premiership curtain raiser for both clubs. First-half Goals from Joe Cole, Nicolas Anelka and Frank Lampard insured three points for the Blues, while Deco's out-of-nothing scorcher in the 89th minute capped a memorable performance -- one which will have put the rest of the league, including Fergie's boys, on notice.

Uncle Phil opted for a 4-3-3, with Deco starting out on the right flank and Lampard, Ballack and Obi-Wan comprising the midfield. That decision was made easier with Essien missing out on the match due to injury. Regardless, the formation worked to perfection as the Blues thoroughly dominated Pompey from the opening kickoff.

Expansive, open and fluid, Chelsea worked the ball around, through and past Portsmouth with ease. Pompey had trouble even identifying the danger, with nearly ever Blues player surfacing in troublesome positions. Deco and Ballack, in particular, caught the eye early, the later setting up Joey Cole's opener with a dainty chip into space for the England international to half-volley past David James. It was too bad, then, that Ballack was forced to retire after just 38 minutes with an ankle injury.

It matter little, though, as the Blues continued to torment. Deco proved the naysayers plenty wrong, spraying passes with precision and adding a scorching 30-yarder strike in stoppage time to his wonderful debut. Jose Bosingwa was just as impressive in his inaugural run, showing relentless drive in attack and giving us a threat from right fullback that we have not had in quite some time.

His partner in crime, Ashley Cole, was also involved heavily. Cashley found himself in the opposition half more than he would have probably ever imagined. His namesake, Joe, has been linked with a move away from the club for, what, a month now? His performance, incisive and effective, proved just how much his presence is warranted in London.

Sure, it's too early to crown Chelsea champions. But this result certainly is a wonderful foundation for what could be a historic season.

Man of the Match
Much can be said about Deco's display. But I opt for the work of John Obi Mikel in the holding role vacated by the legend, Claude Makelele. Mikel's work was neat, his decision making quality and demeanor comfortable. It was an entirely different player on show. He provided the platform for the freedom such players as Deco and Lampard enjoyed during the match. If this is any indication of what's to come, then wow.