The time has finally arrived. Word.

Chelsea begins a new era today as it opens the 2008-09 season against Portsmouth at Stamford Bridge. The match marks the debut for Blues manager Luiz Felipe Scolari, who returns to club football for the first time in seven years.

The Blues are not only looking to extend their immaculate home unbeaten streak to 83 games, but also their 21-game Premiership unbeaten run. 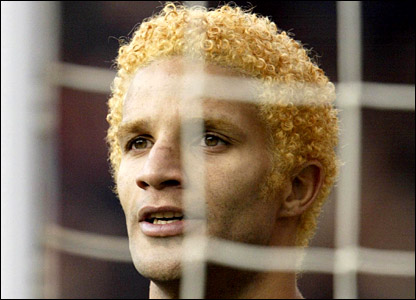 Chelsea team news
The match marks the first competitive action in blue for Portugeezers Deco and Bosingwa -- who is still recovering from a thigh injury and may miss the match. Both will no doubt add plenty of creativity and verve to the Prem's most impressive XI. That XI is cloaked in smoke at the moment, most notably in midfield where none of us -- not even Uncle Phil -- know who will start in the middle. I'd vote for a Deco, Essien, Lampard run out today.

In a 4-3-3, that magnificent triumverate will likely be flanked by Joey Cole & Flo Malouda. Upstanding gentleman Nicolas Anelka will helm the forward line, with the ever schizo Didier Drogba and Andriy Shevchenko sidelined by injury.

Le Sulk sparkled in preseason, his highlight a four-bagger against AC Milan. The pressure will be on Anelka to produce early on, not just because of injuries but because of his genuinely poor run last season after joining Chelsea in January. He, at least, should be more comfortable -- and much happier -- under Scolari, who plans to employ the French international in his traditional forward role.

At the back, we're as solid as ever. John Terry and Ricky Carvalho are rocks in the center, with Cashley and Bosingwa providing excellent flank play. Paulo Ferreira, likely to start due to Bos' injury, is certainly not a bad replacement. Petr Cech, though uncharacteristically shaky over the past year, is still world class in goal.

Portsmouth team news
A talented Pompey squad will look at this fixture optimistically. A point would do them well, and with Chelsea still adapting to Scolari, they will fancy their chances. The fixture will mark a return to the Bridge for Lassana Diarra. The former Blue has put on the class for Portsmouth since his move from Arsenal, and will no doubt be looking to impress in front of former teammates.
In Jermain Defoe and Peter Crouch, Pompey have a dangerous strike pairing featuring both size and speed. Their most glaring hole will be in midfield, though, as the club has yet to replace Sulley Muntari who signed for The Ordinary One's Inter Milan just a few weeks ago. At the back, Pompey is old. Real old. Sol, Sylvain and David are a combined 101 years old.

History
It doesn't look good for Portsmouth. Pompey has never defeated Chelsea in the Premiership (0-9-1) and have dropped more points (29) to the Blues than any other club since it's promotion in 2003. 'Arry's boys haven't beaten Chelsea at Stamford Bridge in 53 years.

Prediction
This is probably the best game of the opening week of the season. I expect a filling out process from the Blues, but not one that includes a defeat. A 2-1 scoreline seems fitting.