The 2007-08 season was an unprecedented one for Chelsea Football Club. The Blues reached their first-ever Champions League final. They also amassed an impressive 85 points in Premiership play. Regardless, Chelsea failed to acquire any hardware for the first time in three seasons. The Blues finished runners-up in three competitions -- Premiership, Champions League and Carling Cup -- their EPL tally of 85 points the most for a second-place team ever.

Regardless of your view of 07-08, it was deemed unacceptable by the Chelsea staff. Thus began a massive rebuilding project. How will the Blues fare in 08-09? Let's take a look. 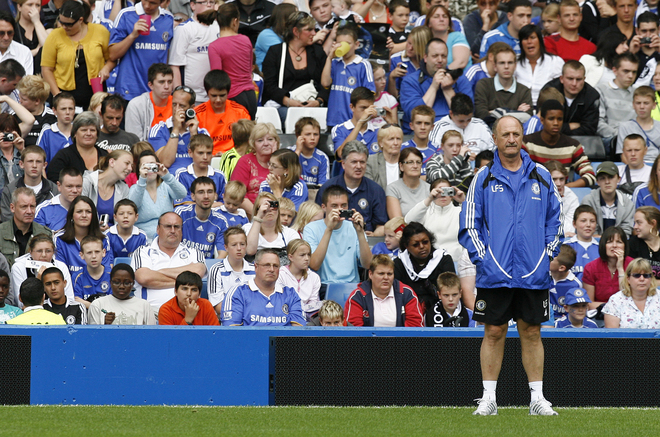 Destory & Rebuild
The Blues have certainly been active this summer. It all started with the signing of Jose Bosingwa, who joined from FC Porto for £16.3 million on May 11. Right fullback, a problem at Chelsea for some time, now appears to be a strength with Bos, who is relentless getting forward and solid defensively.
His signing was dwarfed, however, by the managerial caper that engulfed the club for months. Following Chelsea's CL final defeat, the club decided to part ways with Avram Grant who took over for Jose Mourinho earlier in the season. Grant's firing/resignation split opinion with supporters, but the most pressing concern regarded who would be the replacement. After months of speculation, torrid rumors and intense debate, the club settled on Portugal national team coach Luiz Felipe Scolari. Unlike Grant, Scolari brings experience at the top level and exudes success. He breeds confidence, not only amongst the players but the fans as well. A massive upgrade.
Deco followed his national team manager to London in an 8mil deal soon thereafter. Exiled at Barcelona, Deco sought a new challenge and certainly has found one with Chelsea. The Brazilian-born midfielder will be asked to bring much-needed creativity and flair to a team built around uncompromised strength and resiliency. How he fits in, and adjusts to the English style of play, will no doubt be a focal point.

Departures?
Perhaps Chelsea's biggest task this summer -- and possibly it's greatest accomplishment -- was retaining its star players. Ricky Carvalho, Didier Drogba and Frank Lampard all appeared close to leaving the Blues in the offseason. None did, leaving the club without any major holes to fill. Lampard's situation proved the most volatile, with the England midfielder looking certain to join Mourihno at Inter Milan sometime during the summer. Instead, Lampard signed a new contract last week with Chelsea after some two years of negotiation. Drogba's bipolar disorder subdued as the offseason progressed, and has now committed to the club for the upcoming season (how long that lasts is uknown). Carvalho, a target of Real Madrid, chose to remain with the club -- a massive boost for one of the best defenses in the world.

Question marks
Of the questions marks surrounding Chelsea this year -- there isn't many -- the one that comes up most often is in midfield. Specifically, how will Uncle Phil fit Michael Ballack, Frank Lampard, Deco and Michael Essien into a 4-3-3. Add Joe Cole, Shaun Wright-Phillips and Florent Malouda to the equation if Scolari opts for a 4-4-2 or 4-3-1-2. It's an interesting concept, though no dilemma. Deco and Essien appear locks in recent quotes and performances are to hold weight. So then, you ask yourself: How do you leave Lampard out following three 20-plus goal seasons? And Ballack, well, he was central to our inspired run at the end of last season. There's no definitive answer to this question, even if your name is Scolari. We'll just have to wait and see how it pans out.
Also in question is our situation up front. No Blues striker had a particularly good 07-08 season, save Drogba's displays in a handful of key matches. He's injured to open the new year, along with Sheva. That leaves Nicolas Anelka as the only recognized striker in the squad with Prem experience. Sulky has shown promise in preseason play, but his lack of form after joining the club in January leaves a bad taste in many supporters' mouths. Teen phenon Franco Di Santo will likely see time as well, but can Chelsea really count on a kid without a single Premiership match under his belt to contribute immediately?
Among those mentioned as transfer targets is Real Madrid winger Robinho. A deal is still being discussed, but certainly isn't a sure thing. How the club deals with the situation will be key.

Predicitions
Fergie says Chelsea has peaked. I'm not sold. Although it can be argued against -- somewhat -- Chelsea, for me, has the strongest squad in the English Premiership. On form, you will be hard pressed to find a better collection of players in the world. More over, the Blues have not regressed since last season, only improved. The addition of Deco adds depth to an already stacked midfield and Bosingwa should sure up the only real problem position from a year ago. The biggest improvement, however, is in the hot box. Scolari is a massive upgrade over Grant and his ability, experience and proven track record should secure Chelsea at least two trophies in the upcoming campaign.