Luiz Felipe Scolari, from now on here at the Offside known as Uncle Phil, hasn't even taken over at Chelsea yet. That hasn't stopped the rumor mill, and it's continued ridiculousness, from churning out obscene amounts of transfer speculation regarding the club. A whole heap of numbers is being thrown around, but the one popping up the most is £100mil. Yes, Uncle Phil has a cool century to spend on whomever he pleases this summer. We know most of the names. Now, let's take a look at whether or not we want these egomaniacs at our club, and whether my targets -- or yours for that matter -- are a little more sensible.

Reported Targets
Ronaldinho
Boundless talent. Boundless escapades. The ties between Uncle Phil and Ronnie run deep, an 02 WC title the one that binds. Exiled at Barcelona, a move for the 28-year-old attacking midfield/striker is as sure a bet as one can find. Manchester City is also keen, and willing to throw 180K at Ronnie's feet to secure his autograph. That's irrelevant, really, as Romes most definitely will be willing to match whatever fee/salary/call girl package Ronnie is seeking. If he's focused, in shape and energized, there's no doubt he is one of the best in the world. But, when has that been the case? Since Barca's run to the CL crown in 2006, he's been a shell of the transcendent player he once was.
Likely Fee: 15-plus mil, 130-plus salary
Verdict: No Thanks 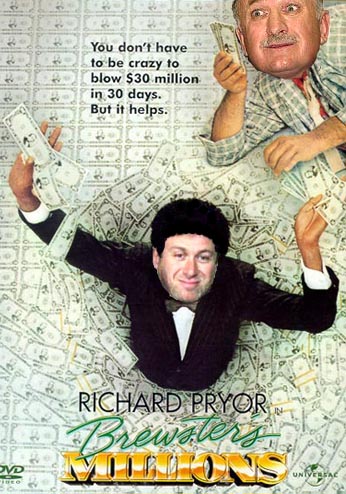 Deco
No player has been linked as strongly with Chelsea since the Scolari announcement. At 30, Deco is entering the twilight of his career. That's not to say he still isn't effective. Blessed with all the tools -- tactical awareness, technical ability, quality work rate, menace -- the Braziian turned Portugal midfielder was impressive at Euro 08. Inter Milan, and The Ordinary One, are also admirers of Art Deco. If he does, in fact, choose Chelsea it will leave in sharp question the future of Frank Lampard. Reports have suggested Scolari has been pushing for Lampard's contract turmoil to be rectified, making a deal for Deco unlikely. That didn't stop the tabloids from saying a deal with Deco was basically done just a few days ago. Now, rumors suggest Chelsea is balking at the fee Barcelona is seeking (rightfully so). Who knows where this one is heading.
Likely Fee: 12-16mil
Verdict: Not for that kind of loot.

Kaka
He loves God. The question is: Does he love money? The Brazilian dynamo has been on the Chelsea radar for some time, but only now does a deal look remotely possible. Scolari, who guided Kaka at the 02 WC, is rumored to have the 26-year-old at the top of his Blue shopping list. Milan technical director Leonardo has since reiterated what everyone should know: Kaka is not for sale. However, Chelsea does have some candy to negotiate with -- both Drogba and Sheva are targets for Milan. Kaka is a superior talent. More so, he's a superior man, a role model if you will. He and wife, Caroline, had their first child this week, Luca, so we need not worry about him hitting the clubs with Ledley King. He's publicly stated he's not leaving Milan, though, so, really, there's no way he's coming to London. Is he?
Likely Fee: A world-record 60mil has been thrown around
Verdict: If he's willing, definitely.

Samuel Eto'o
Barcelona manager Pep Guardiola confirmed last week that the club was preparing for life without Deco, Sam & Ronnie. All three at one time or another have been linked with a move to Chelsea. Eto'o is one we should certainly at least kept an eye on, even if I'm not the biggest proponent of his signing. Of course, the numbers totally destroy any argument I can post. In 08, deemed a poor season for Eto'o by most, he netted 16 times in 18 La Liga appearances. Going against him is his health -- Eto'o has been injury-prone over the past two seasons -- and his infamous record of poor behavior. Dude assaults heads like no other. Still, Eto's only 27 and, depending on the price, he would certainly be a quality option. Inter, Milan and Tottenham (bah) are also keen.
Likely Fee: 18-20mil
Verdict: Let's just say, I wouldn't be opposed.

David Villa
I remember when we were linked with Villa following the 06-07 season, and rubbishing the rumor after watching him tank against us in the CL. Now, I'd welcome the diminutive Spaniard, even if he doesn't want to come to London. You can't really argue with his display thus far at Euro 08. He's looked more sharp, and much more effective, than another of our targets -- one Fernando Torres. Valencia, strapped with debt, appeared likely to sell the 26-year old, but Villa's public comments have apparently put that idea to rest. If he was to move, it would be to another club in Spain. He'll likely end up at Liverpool then.
Likely Fee: 25-30mil
Verdict: Yes please.

Fernando Torres
El Nino is Spanish for .. the nino. Somehow, this guy keeps coming up in transfer rumors with Chelsea. It was 40mil, now its 50mil. What's the deal (in Seinfield voice)? Tommy Hicks came out recently and officially said Torres wouldn't be leaving Liverpool, not even for a world-record fee. With tension still high in the Anfield hierarchy, time will tell whether or not Hicks' words ring true.
Likely Fee: Upwards of 50mil
Verdict: Never going to happen so why even speculate?

Franck Ribery
For my money, the best of the lot when it comes to adaptable wingers. Ribery did not have the best Euro, a nasty ankle injury ending his campaign only 20 minutes into Tuesday's group decider, but I think it goes without saying that he's one of the most dynamic players in Europe. An unorthodox left-winger, Ribery lit up the Bundesliga during his first season with Bayern, scoring 11 goals in 28 league appearances. He's got the creativity and the pace. Plus, any man who turns down plastic surgery is a go for me.
Likely Fee: 30mil
Verdict: Most def son

Robinho
Robinho is somewhat similar to Ribery in that he's a right-footed left-winger. Mr. 40 Condoms is a year younger, though, and probably considered by most much more of a flair player. In his third season with Real Madrid, Robby blossomed and finished with 11 goals and 14 assists. Incredibly quick, fantastic agility and has added a lethal touch in front of goal to his arsenal.
Likely Fee: 20-25mil
Verdict: Prefer Ribery. I'll call this one a push.

My Targets (other than Ribery, Villa of course)
Mario Gomez
Yeah, yeah. I know he's had a poor Euro 2008 (more like egregious). Give it a rest. This kid has all the tools to slot right in & perform right away for Chelsea. Size (6-foot-2), strength, good ball skills, alarming goal return in league (19 goals in 23 Bundesliga games this past season) = perfect replacement for Drogs. Then again, who knows if we'll play that type of system under Scolari. Still, he's certainly worth a punt. If we need even more reason, his stock has to have dropped significantly since before Euro. Maybe we can bag him for a bargain. Bayern has upped their interest in the kid, while Roma and Barca are also said to be in the frame.
Likely Fee: 15-20mil

Hatem Ben-Arfa
If a deal with Ribery doesn't come to fruition (almost a certainty) or if Robinho ends up staying or at United, I wouldn't mind us chasing the young Lyon winger. Ben-Arfa started his career as a striker, and has the predatorial instinct we've been lacking from our flank players. The club is open to selling Ben-Arfa, who is also a target of Manchester United and Roma. It's said, however, the player may be more interested in a move within the French league, either to PSG or Marseille.
Likely Fee: 11mil

Andrei Arshavin
If you didn't see this man for Zenit St. Petersburg, particularly against Leverkusen in the UEFA Cup, you missed out. However, you should have got your fill in his Euro 08 debut when he scathed Sweden all night long. The 25-year-old, who usually sits in the hole behind the main striker, is electric. Fantastic positional sense and awareness; intelligent with the ball at his feet. What else? He plays the "killer ball." You know, the one we've been missing over the last couple of years? Manchester City and Newcastle are interested, but I doubt they'll be the only suitors now. It would be nice to see Roman pull a power-play on this one.
Likely Fee: 12-15mil ... and rising

Phillipe Mexes
This is a big if. As in, if Carvalho leaves. If he does, then we'll be short at center half if you ask me. Alex, JT and Ivanovic. Out of those three, only two have Premiership experience and we don't even know if Alex can last a full season in the center. Mexes combines great pace (lacking from Alex, JT) with adequate strength and excellent passing ability.
Likely Fee: 15-18mil

Ivan Rakitić
More creative juice for the cup. Genuinely two-footed and chocked full of technical ability, he can pretty much slot in anywhere across the middle -- though he's probably seen more as an attacking midfielder. Raks has that uncanny ability to read opponents and situations and his service into the area is consistently good. Forget the penalty miss against Turkey, and focus on the rest of the match he had. Then you'll get an idea why a host of clubs are chasing him including Juventus.
Likely Fee: 10-13mil

Of course there's plenty more I would love to see us target -- Kun, Messi, De Jong, etc. -- but I'll bring this appallingly long post to an end. From the targets we're currently being linked with, who do you guys like? Outside the box, who would you like to see Chelsea bring in? I'm interested to know so, you know, drop me a line or two.