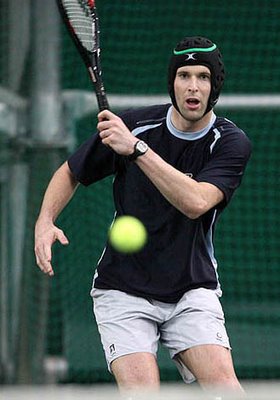 Pete Cech is already a Chelsea legend. Today, he's added to the lore with a veritable buffet of hatred for Wenger & Co. Cech told The Sun:

"You need to get the trophies because in the end if you take the last three years of Arsenal, I don't think in 10 years people will remember that between 2004 and 2008 they played brilliant football. No-one will remember because they finished fourth and third — this is what I am talking about.

"History recognizes the winners, so if you take someone who won the Champions League 20 years ago and ask them who their opponent was, they don't remember."

Is that not brilliant? Take that "sexy" football. Add in the fact that Wenger son has lost Flamini and looks set to see Alexander Hleb bolt, and it just adds to my joy.

The Czech Zorro went on to address the upcoming CL final with United: "You don't go to the final to take part."

This man deserves an award.