Samsonite? I was way off.

Share All sharing options for: Samsonite? I was way off. 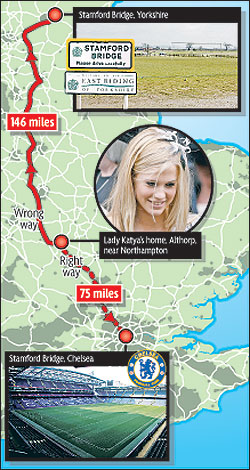 I'd hate to be this guy. All 15-year-old Katya wanted was to see her beloved Chelsea trample Arsenal at Stamford Bridge. Instead, she ended up at some damned imposter 229 miles from the geniune article.

As it turns out, some ig-norant taxi driver fired up the trusty GPS to find Stamford Bridge -- isn't this place pretty big and in London? Couldn't be that hard to find. Anyway, the GPS gave him directions to another Stamford Bridge, one in the East Riding of Yorkshire.

Peter Achiampong, owner of absurdly terrible taxi service, said: "The driver put Stamford Bridge in his sat-nav and it said it was north. It was confirmed by the controller. It's baffling."

No, not baffling Peter; just stupid. I suggest you refund her fair, buy her a TBH jersey and daisys, plus tix to a game of her choosing. Anyone thinking this driver was a Liverpool fan?