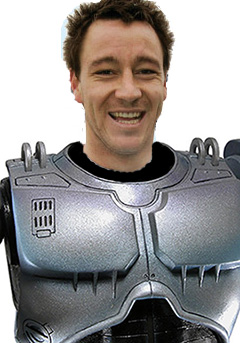 John Terry is baaaaack. What's that? You can't believe it? Neither can I my friend, neither can I. Three weeks ahead of schedule, Terry has supposedly been passed fit for today's FA Cup fifth-round tie against Huddesfield Town at the Bridge. JT originally fractured three bones in his right foot in December against f**king Arsenal.

"He has surprised us all," Chelsea manager Avram Grant said. "Maybe he is a bionic man. He recovers very quickly. Maybe he will be on the bench or even start, but we haven’t decided yet. Each injury depends on the person and he is very strong, not just mentally but also physically."

It's a major boost -- not that this team hasn't played superbly in his absence. Perhaps more importantly, his return along with our Africans leaves Chelsea with the closest thing its seen to a full team since, what, 2005 B.R. (before Robben).

Huddersfield brings former Blue Frank Sinclair back to West London. With a win or draw, the Blues will set a new club benchmark of 59 straight home games without a defeat in all competitions -- dating to a Champions League defeat to Barcelona in February 2006.

I do not think we will see a weakened Chelsea side here. This is significant because we might just get our first look at an Anelka-Drogba stage show. As for Terry, I hope he doesn't get more than 10-20 minutes. Let's work this guy in slowly -- I feel he's been rushed back from injury of late.