Share All sharing options for: Dude, where's my Chelsea?

Thanks to CFCnet reader JABS for that headline, perfect to describe the Blues' current plight.

So we've lost another match at home. Another match to a member of the Big Four. Crisis mode in London?

Not quite. But it's closer than many might want to think. 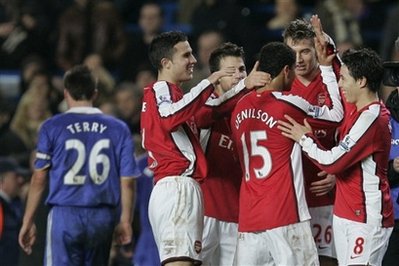 With Chelsea's 2-1 loss to Arsenal on Sunday at Stamford Bridge, the Blues fell off the Premier League's perch. Of course, there was an incorrect decision made that led to the Gunnas' opening goal, and blah blah blah. But that doesn't take away from the horrid display put forth by Chelsea after falling behind. Just depressing.

The loss marked the Blues' third loss in five games at home -- I count Burnley as a defeat, I don't care.

That, my friends, is unbelievable. Just a few weeks ago, Chelsea was strolling along with a record -- never-to-be-broken -- 84 matches without a loss at home. Now, the Bridge has not just lost, but had its air of invincibility stripped off like lingerie on a broke stripper. Sunday's match also represented the end of our home slate against fellow title challengers Arsenal, Manchester United and Liverpool. What do the Blues have to show from those matches? A point. One, solitary point?

Those stats can hardly be dismissed. In fact, if they don't represent a cause for some type of concern I don't know what is.

However, the real concern -- and I mean, the one that has me dwelling over past performances day and night -- is the lack of drive, the lack of killer instinct this team has displayed thus far this season. What happened to the cold, merciless machine that existed under Mourinho? Or even under Grant for periods?

There just doesn't seem to be any sense of urgency, or comradery, within this current squad. I've heard some say its because Uncle Phil, the so-called coaching genius, has arrived and thus given the squad a reason to slack off. Philly (steak) will solve all our problems, all we have to do is show up. I, for one, don't think that's the case.

Second, and the most likely of scenarios, is that we've sacrificed our rock-like stature for a more flowing brand of football, i.e. Arsenal. That I can buy. It just seems as if, by promoting this new style Scolari has overlooked one important thing: This team in its current composition was not built for posh football. Mourinho compiled these men to steamroll opponents physically and mentally.

With that being said that we have to grant Uncle Phil leniance. I mean, I've read all kinds of discussions centered on his dismissal. The man has been here for a few months, calm yourselves. He may or may not be the man. But only a proper amount of time will tell. I just hope that in time he'll assemble a batch of players that fit his requirements, meld them with our already-imposing unit and create an all-conquering brand of kick you in the teeth while playing the most awe-inspiring football we've ever seen.

Then again, does he even have a pound to spend on this club? I guess I'll save that discussion for another day.