Share All sharing options for: The Great Drogba Debacle, Pt. 786

So Drogbacite is at it again. Who would've thunk it?

Ze Drogs sat down with the always-reliable Sun for an exclusive interview. Bi-polar man spilled his heart to the newspaper, speaking on such topics as how he nearly quit the game last year and how horrible that 90 thousand a week salary really is. 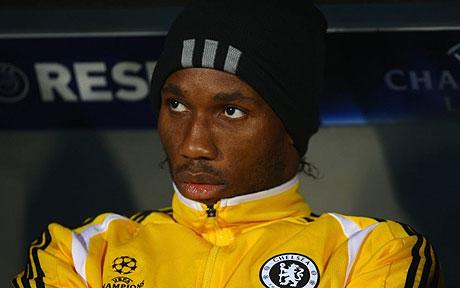 The Sun took the time to outline what exactly Drogs talks about early in the story. Peep...

That's the Drogs we all know and love. The drama queen has returned!

Let's analyze some of the interview's more interesting parts
--The Ivorian, up for the Nobel Prize this year, on the most difficult time of his career: "The hardest thing I had to endure this year wasn’t football related. The death of my grandmother completely struck me down, more than anything else. I was very, very close to her and it really made me suffer. I had the feeling that all my childhood memories were going with her. I became old suddenly.

"This made me ask a few questions to myself. I wondered what I was running after. I said to myself that it was pretty useless to run after results, stats or rewards.

"It’s true that I didn’t feel a great support. But that didn’t worry me really. For a few weeks I didn’t have my head tuned into football at all. I didn’t want to hear about targets or ambition. I felt totally switched off.

"For the first time, I had lost my passion for football. I was ordinary. I didn’t want to fight. All summer, I felt bad. I am not looking for excuses. I just admit that, for a while, I put football on the back-burner."

Fine. I totally understand losing your focus after a blow like that. But to call out the club over support is preposterous. I mean, look at Super Frank. That man lost his mother, and pushed on like no other. Of course, not everyone is like that, which I understand. But exposing the club for really no reason is absurd.

--On feeling lonely, so lonely: "I felt lonely when the season started in July. Everybody was obsessed with winning their place in the team. And I was stuck in the fitness room when the group left for a preseason tour. I was alone with the machines.

"I didn’t really have anyone to talk to. Every year I have been losing a close friend. There was Geremi, then William Gallas, then Makelele. It’s a lot. I went through a big moment of loneliness."

Are you serious? You're really going to use this as an excuse? Sure, losing a friend sucks. But this is a business and you're a professional, right? Do your job. You're getting paid 90K a week to perform, not to sulk over failed bromances.

And finally: "Am I at the right place for 2009? Only time will tell. If we win the Champions League in May, the answer will be obvious."

Only success will define your happiness Drogba? That's so damn selfish. Makes sense, really.
News surfaced today regarding a closed-door meeting between staff and players which I'll touch on in another post. But I have to speak on it here since players are said to be united in wanting to see Drogba out in January. Whoa.

What's next for the headphoned one. Only time -- and money -- will tell.