Damn. I emerge from a cocoon of illness (a nasty cold if you must know) on Saturday only for Chelsea to make me sick Sunday. Isn't it ironic, don't you think?

On Saturday, it couldn't have gone better for the Blues. The Scum draw. Arsenal draw. United draw.

Couldn't have asked for a better home date, either -- West Ham? Sure, Zola was coming back, blah blah blah. But that doesn't hide the fact that they are a side which Chelsea should not only defeat, but defeat handily. What did we get? A come-from-behind draw? 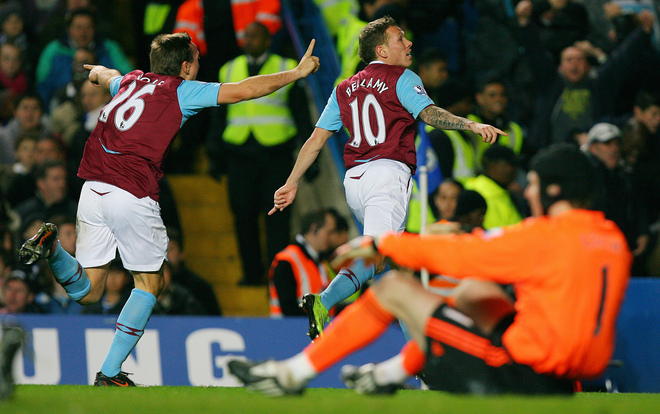 Are you serious? Again?

The egregious home form continues! It's damn near unbelievable to be honest.

What's more unbelievable at the moment is the lack of invention from this side. We seem to have blinders on when it comes to tactics. Our current system, while effective earlier in the season, has simply been found out. No longer are clubs bewildered by the "quick" passing game. And neither are clubs intimidated by our supposed "rampaging" fullbacks -- considering their the only players in the current side that have shown real attacking emphasis is enough of a concern.

Let's not even touch on the midfield crisis at this time. OK, lets. Deco. Why is he continuing to hold a starting place in this team? Aside from his goal against Bolton, the man has been ineffective. Wait, that's too nice of a word. He's been lost, timid, and a hindrance. Against West Ham, he was set up out wide. What did he do? He drifted inside on nearly every opportunity, cluttering an already-crowded midfield. Scolari needs to get over his Portugese bias ASAP.

Of course there were some abysmal refereeing decisions that could or could not have cost us three points. Clearly luck is not on our side at the moment. But far more worrying for me is the performances currently on display, home and away.

Then again, you know, we're only a point off the top. It's crazy really. The gap certainly has been trimmed in England. Lets just hope Uncle Phil flushes this out soon -- and our dominance returns.