Is Owen the answer?

Share All sharing options for: Is Owen the answer?

So Chelsea is really struggling up front. The newest of new rumors to somewhat resolve the problem is Michael Owen.

The Newcastle striker, out of contract at the end of the season, would supposedly be available for between £3-5 million. Owen, made of premium breakaway glass, has lost his place under Joe Kinnear mainly because of his injury-laden lifestyle. I mean, Shola Ameobi has slid into the starting XI. That shit's crazy B. 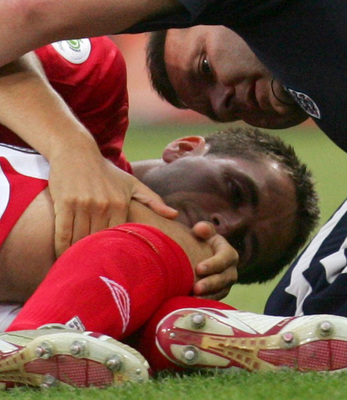 Anyway, Owen is allegedly on the Chelsea radar because Uncle Phil has only £10m to spend in the window. Ten million? Seriously? What has the world come to? This credit crunch is no joke.

Still, is Owen a proper buy with a 10m kitty? He's scored five goals in nine games this season but, of course, he's been injured throughout. Christ, he's made less than 50 appearances for Newcastle since he moved to Tyneside in 2005. That's crazy.

So, do you think Michael Owen would qualify as a good buy for the Blues? Personally, I'd much rather go after a sturdier, younger -- quicker -- striker with upside. Owen may still have quality, but he's far from the vintage world-class poacher he once was. Yes, he has Premiership experience. But, how many games will we reap the benefits of that experience. Furthermore, let's not forget, this guy is a former Scouser. We've already got one (Anelka), we don't need anymore.

For my money, why not try and pry one of those Hoffenheim youngstas away. How about Chinedu Obasi Ogbuke? We've been linked with the 22-year-old, and he's shown flashes of brilliance thus far this season. Make it happen Roman (and make sure you watch the video below on mute).

Then again, this whole 10mil thing may just be a smokescreen to throw off potential competitors interested in our top targets. Kun anyone?