Drogs to sit for 3

Share All sharing options for: Drogs to sit for 3

Drogbacite has been handed a three-match ban for his Robin Hood-like generosity against Burnley in the Carling Cup last week. 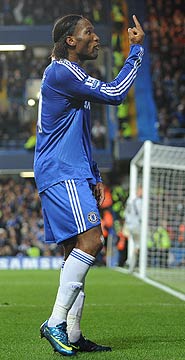 The big Ivorian with a small threshhold for pain chucked a coin into the Burnley fan section, in hopes of rewarding the poverty-stricken town with a bit of cash for the trip home. Instead, he's actions have been viewed as sinister -- as if he was trying to harm opposing fans?! Noooooo.

"Drogba admitted a charge of violent conduct. The charge related to Drogba throwing a missile into the away section of the crowd after scoring during the League Cup match against Burnley at Stamford Bridge on Wednesday 12 November. Drogba will serve the suspension with immediate effect."

So the Drogs will miss our key match against Arsenal at Stamford Bridge in a couple weeks. And, seeing as how Drogba has tormented the Gunners of late (what is it, 7 or so goals?), this could be a hugh miss. Then again, The Incredible Sulk is bagging 'em like no other right now.