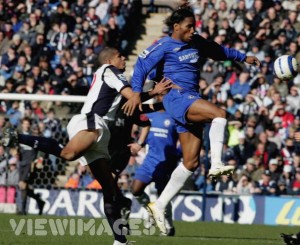 West Brom at the Hawthorns, eh? I guess we should expect a six- or seven-goal barrage.

We soon shall see.

Coming off the grotesqueness of midweek -- a loss to Championship side Burnley at Stamford Bridge on penalty kicks -- we all should expect Chelsea to pursue an immediate response. Immediate response? More like a decisive and swift kick to the Albion balls.

My hopes, and dreams, are that Michael Ballack will play a role in today's match. We also should see Cashley back in at left back. After Wayne Bridge's performance midweek, I'm nearly splooging with joy over that news. And, of course, there's Drogs. After his Robin Hood-esque performance against Burnley, I expect the man to throw only goals at the audience this time 'round.

As always, keep me abreast (a breast?) of your views, thoughts and fears before, during and after the match right here. Son.