A decade ago against Ipswich. Where? In the Carling Cup, of course.

So, Chelsea got its just desserts Wednesday, falling 5-4 in a penalty shootout to Championship side Burnley in the fourth round of the league cup. The Drogs had put the Blues ahead after 27 minutes, but a combination of wastefulness from Chels and endeavor from Burnley saw the Clarets level on 69 minutes. They, then, fended off a siege and dropped us -- fittingly -- in penalties.

All this came at Stamford Bridge. Really? Yeah, really. 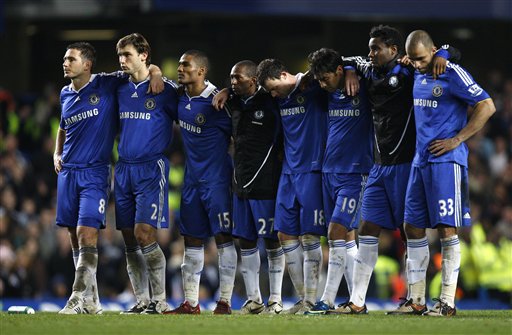 That's two losses at home, though this one wasn't really a loss (but who are we kidding), and three in the past six matches. So, how are we supposed to look at this?

There are two options.

The first: worry.
Our current form is so erratic it's not funny. Add in the fact that we fielded a scrong XI today, and you have to somewhat wonder what exactly's going on with the club at the moment. It's not as if we threw out the youngstas, and they didn't have the mettle. We had internationals out there -- who looked as if they were disinterested. Well, everyone except Super Frank and Miniero from what I've heard.

I mean, if we're going to lose in the league cup why not let our "pristine" youth players have a go. I don't know why we even have an academy sometimes.

The second: disregard
As one astute member of CFC Net said: "We lost to Burnley on Pens tonight. We lost to Charlton at home on Pens in our title winning season when we were invincible at home. We lost to Barnsley last season. These things happen. And not just to us. To everyone. "

"Flip" a coin
In the not-so-shocking world of Ze Drogs, our favorite Ivorian fired a coin -- which was first fired at him --back into the crowd after scoring his first goal since 1936. He also used the patented "one-finger salute" to add even more insult to injury.

The big man had this to say afterward: "I tried to celebrate the goal and I received some things at me. The big mistake I did was to throw it back so if someone was hurt I just want to apologise for it. This is not something I should show in a football match and I want to apologise. It was an incident in the heat of the moment and I regret it."

Wonderful news, I say. What kind of ban can we expect?

Conclusion
Regarding my two types of reactions to the result, I fall somewhere between them both. Of course shock defeats happen in Cup ties all the time. However, you really can't look past our recent form can you?

I mean, we're up, we're down. We're up, we're down. It's a rollercoaster. Lacking that real consistency that transformed us into a machine under Mourinho may be a serious problem as the season progresses. Of course we're top of the Prem now, but that means absolutely nil in November.

So, six past Albion on the weekend then? Video of the match below.