Why Chelsea are better off without Drogs

Share All sharing options for: Why Chelsea are better off without Drogs

I know, I know. After all that Didier Drogba has done as a Blue, a statement like that is damn near blasphemous.

But hear me out. 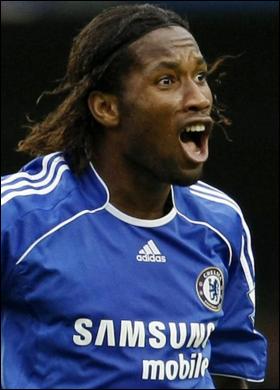 I want you to take a look at two Chelsea peformances this season: the 0-0 draw with CFR Cluj and the subsequent 2-0 win against Aston Villa.

Drogba started up front against Cluj, flanked by Florent Malouda on the left and Salomon Kalou to the right. The result was a stagnant performance, littered with a lack of service or real creativity. Much of the display can be linked to the lack of attacking play from fullbacks Bosingwa and Wayne Bridge. Cluj, dangerous on the counter and deep-lying, kept both in check. WIthout the overlapping runs, Kalou and Malouda had trouble unlocking the defense -- mostly because of a lack of imagination.

BUT, with Drogba in the frame, it presents Chelsea with what appears to be an easy target -- a bailout if you will. With Drogs, you can play direct. Chelsea can send long balls into the Ivorian in hopes that he'll hold the ball up, then either go to work on his own or find the open teammate. And, with Drogba being one of the finest point men in the game today, it usually comes off.

That hasn't been the case thus far this season, however. And it wasn't the case against Cluj. It was tried; it failed. Drogs has missed time due to injury this year and, when in the lineup, has clearly looked off the pace.

Now, let's look at the Villa performance. With Drogba injured, Nicolas Anelka regained his place up top. This time he was flanked by Flo on the left and Joey Cole to the right. The result was a fantastically lethal performance from the Blues.

Force to go through Villa rather than over, Chelsea ripped the visitors apart -- from the flanks, the middle, wherever need be. Ashley Cole ravaged opposition on the left side, linking up with a reborn Malouda to cause havoc at almost every occasion. Even with a knock, Anelka showed much to those of us who doubt his abilities (see me). This kind of incisive passing and movement hasn't been seen at Chelsea for years. Not even Mourinho could call on this kind of style; well, except for maybe a spell in 04 when Arjen Robben was fully healthy. The midfield can lay large claim to the success, with Lampard, Ballack and the always-improving Mikel overrunning what Villa had to offer. Sorry, but Nigel Reo-Coker is no match for this kind of class. Still, it all starts with having to pass rather than hit and hope. It all starts without the safety valve aka Drogba.

So, without alienating Drogs or ze Drogs lovers, I think right now we're a better team without him as the fulcrum. As results have shown -- with the exception of Tottenham at the Bridge -- we've been a much better side without him. The aggressiveness, the movement, the flair; it's all there without him. There's no doubt we'll need him eventually, I won't dispute that. But, right now, we're just fine without the large Ivorian tantrum unleasher.