Yesterday afternoon, during the second half of Chelsea's horrific display against CFR Cluj, Didier Drogba suffered what looked to be a season-ending knee injury. Key word: looked.

After a day of undergoing medical diagnosis, it appears as if the Ivorian maniac will in fact only miss a few weeks. This according to the Chelsea Web site:

"Didier Drogba has had two forceful rotations in his knee and ankle. Fortunately, he has avoided any significant ligamentus rupture. He will not be requiring surgery. We will keep him under observation for the next two or three days before putting an estimate on how long he'll be out, but we're certainly looking at weeks, not months." 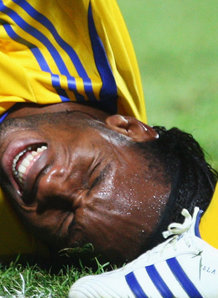 Thank God. But, with Ricky and Deco still out, and JT, Alex and Cashley carrying knocks the question still lingers: Is this squad too thin?

At the back, we should be fine -- that is if Ivanovic is finally given a chance to glimmer like Cheryl's wedding band. Up front, I'm not so sure.

Before the season, you readers should remember me pushing for the club to not only sign a winger but a striker as well. We got neither. Now, it's not even a question of whether we need more numbers; it's a necessity.

Regardless of how you feel about Anelka, I'd think you would be logical enough to agree that he simply cannot lead the line for an entire season. The man, despite finding the net a few times already this season, has confidence -- and emotional -- issues. How many sitters has he blown this year? More to the point, who thinks he can actually thrive consistently in our current system/formation? He can't, it's that simple.

That leaves the club, as of right now, with two striking options: Salomon Kalou and Franco Di Santo. I'm leaving Scott Sinclair off this list because, really, I haven't seen any indication that he's in the mix for a run in the team. I've also heard loan rumors, particularly with Swansea.

Anyway, on with Kalou. Who's seen enough from this kid to think he can provide consistent goals for Chelsea? I haven't. More so, he's primarily used as a winger anyway.

So that leaves Di Santo. The 19-year-old Argentinian. Untried, untested. Does he have the tools? It certainly looks so. Is he up to the challenge? The way he attacked that first ball hit toward him in Transylvania, I'd say hell yeah. But he's got no experience at the top level, and that my friends is worth its weight in Roman yachts.

Of course, there are plenty of you that will say I'm overreacting. And you would have a point. Drogba has yet to score for the club this season -- and we're undefeated. Of course I agree. But seriously, how long do you think we can survive without solid production from the front line? Me thinks not very long. Furthermore, even a non-scoring Drogba is a major asset, seeing as his stength and on-the-ball ability make him ideal for our system. Don't forget his work defending set pieces.

So, what's my point? It's quite simple really: Fat Ronaldo. Get the man with an overhang to London asap.