"The players I have at the moment are good, but in the future I will look for more," Wise Scolari told Sky Sports. "I know the English players and I want more English players in my team. I want to win in England." 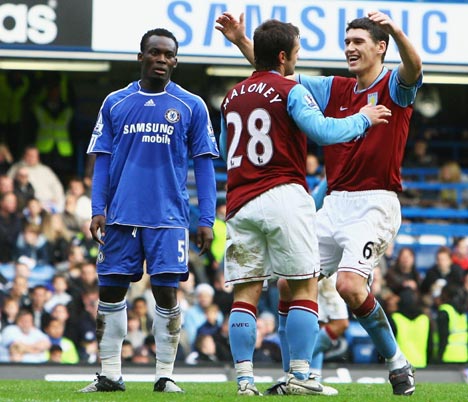 Wasn't it like a year to date that we were linked with the Aston Villa midfielder? And, like we need anymore midfielders. Earth to Uncle Phil: we need pacey -- and effective -- wingers. We need clinical strikers. Make it happen. Not this nonsense.

Mancienne to Wolves
Michael Mancienne has moved to Wolverhampton on loan until Dec. 29. The 20-year-old England under-21 defender has had zero run at Chelsea, and pretty much has no chance of breaking into the squad considering he's currently sitting fifth at centerback behind EBJT, Ricky, Alex and Ivanovic.

A statement on the club's official Web site said:
"Michael Mancienne has today joined Championship side Wolverhampton Wanderers on loan until 29 December.

The centre-back has become a regular fixture in the England Under 21 side in recent months and will be hoping to gain more first team experience while at Molineux.

So far this season he has been an unused substitute three times in the first team."

Dzagoev gots love for Chelsea
CSKA Moscow creative midfielder Alan Dzagoev has recently caught the eye of major clubs, including Real Madrid, thanks to his performances in the UEFA Cup.

The 18-year-old is supposedly a January target of Madrid. But Dzagoev isn't interested in a move to Spain.

In fact, he's not interested in moving at all right now. But when he is, he's likes the look of Stamford Bridge. Speaking to Sport Express, he discussed the recent rumors.

"I'm sure it isn't serious. In any case, I expect to remain at CSKA for a bit longer. Basically I like Chelsea more. I have supported the team for four years already."

NICE DUDE! In 23 games this season, he has scored 12 goals and added seven assists. Check him out, in moving pictures form, below: