Share All sharing options for: Prem Prev: Scum On!

So Liverpool is joint top of the table on points with the mighty Chelsea. This is something new, eh?

The two rivals collide at Stamford Bridge this coming morning with something other than a Champions League final berth on the line for a change. While Chelsea is miles ahead already in goal differential (plus-16 to plus-7), this match presents quite a challenge for the world's best. 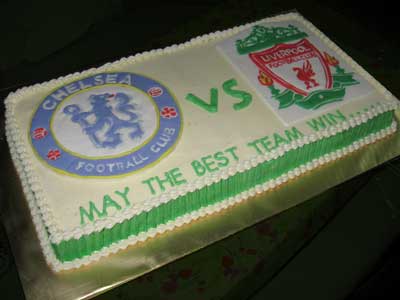 Liverpool has not blown away opponents. Hell, they haven't really been convincing at all. However, what they have done is win -- and that, my friend, is really all that matters. Could it be that the Scouse have a little character league-wise these days. Appears so, unfortunately.

They'll have more motivation than just going top of the Premier League, too. A win, and they will halt the Blues' unmatched 86-yard game unbeaten run at the Bridge. Gerrard & Co. seem to have the best chance they have had since the streak began to break it.

They'll have to do it with out Sillypants Torres, though. Torres, out with a torn scrotum suffered on international duty, will be an asset sorely missed by Liverpool -- but not by Chelsea. Keep that man in the stands, son.

Robbie Keane, if he plays, will no doubt be looked upon to pick up the slack. Seeing as Keano netted a screamer in Chelsea's 4-4 draw with Liverpool last season, and also won the Carling Cup at our expense, he looks a good bet to be amped for the match. I, for one, think the diminutive Irishman will flop harder than Steve "Crocodile" Dundee did in red. I kid, I kid. 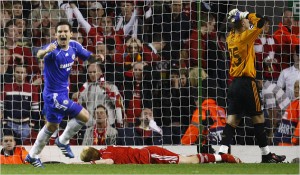 Still, the Pool's injury worries are nothing compared to ours. Michael Ballack, Didier Drogba and Joe Cole are all still out. Ashley Cole could feature, however, which is fine news to be sure.

The rest of the Blues look positively radiant. Anelka, well, let's just hope he's up for it.

Regardless of Anelka's form on the day, expect this match to be won in the middle of the park. Mascherano and Xabi Alonso provide class cover for Liverpool, while Obi-Wan has flourished this season in the Makelele role. Who overpowers who in midfield should walk away with a firm grip on the title race at this moment.

Prediction
Chelsea to win in a wash. Not really. I do, however, expect an illuminating display from the Blues. A 1-0 result -- thanks to Fashionable Frank -- will be simply fantastic.