Share All sharing options for: Match Recap: I'm Back

Sorry for the delay in posts friends. I've been lacking creative inspiration, mainly because of my first -- and last -- trip to Cleveland. Man, that city sucks. It's depressing.

Anyway, let's get back to business.

Chelsea 5, Middlesbrough 0
Wow. What can you say about this club? Who says we're injury depleted? 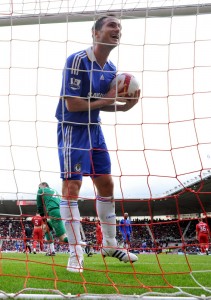 The Blues, despite missing seven legitimate starters, manhandled Boro at the Riverside on Saturday morning. The question now must be posed: Can anyone compete? Next weekend's top-of-the-table clash with Liverpool will go some way in answered that interrogative sentence.

Just look at how The Guardian chose to lead it's match story ...

The gulf between Chelsea and what might be termed the ordinary teams in the Premier League - if that is not too flattering a term for Middlesbrough at the moment - is now officially embarrassing. Or, to use Gareth Southgate's word, painful.

All this against a team Chelsea have somewhat struggled against in recent years -- though last season was more straightforward. The Blues weren't even at their best Saturday. Yet they ran, passed, and shot around, through and past Boro easier than a prozzy makes her way down Sunset. Of course, Boro was egregious at the back; truly a pitiful display from a quartet featuring a youngster tagged to sparkle one day for England (David Wheater).

Salomon Kalou opened the scoring in the 14th minute, thanks to a piece of shady defending. The Ivorian added a second after the break, and also set up Lampard for Chelsea's fourth. Kalou, always an enigma to me, finally looks as if he's managed to balance the flair and consistency needed to succeed in the Premier League. Of course only time will tell if he's truly turned the corner, but from what I've seen thus far this season I'm impressed.

Belletti, thrown in the middle of the park from the start thanks to injuries to Essien, Ballack and Joe Cole as well as Deco's lack of fitness, rewarded the manager's faith with another one of those trademark belters from long range. Similar to his strike against Wigan last year, Belletti took a touch and unleashed an outward swinging screamer past Ross Turnbull. It was sensational as you can see below.

However, that wasn't the best part for me. That would be the killer instinct Chelsea has developed under Uncle Phil. No longer is the club settling for 1-0 victories. It's beautiful to see really, these Blues going for the jugular -- and severing it. Let's just hope we can provide a swift slice to the Liverpool vein Sunday.