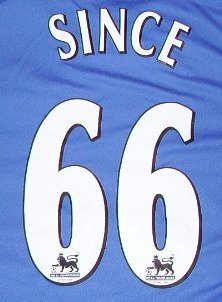 Well I can tell you is that I have renewed my season ticket, sorted.

Jose Mourinho is still at the club as is John Terry, who got married last Friday. Frank is too, but there still this uncertainty that he will be still with us when we kick off against Man Utd in the Community Shield at Wembley, the scene of our FA Cup triumph.

HISTORY as Chelsea became the first club to win the FA Cup Final at the 'New' Wembley.

HISTORY as Chelsea was the last team to win the FA Cup at the 'old' Wembley.

Pizzaro has signed on a free (from Bayern Munich), as has Ben Haim (eventually from Bolton) plus Chelsea have taken on 10 youngsters for the Academy.

Jordan Tabor, a left back from Oxford.

This week Chelsea unveiled their new away shirt. It is an electric Yellow colour, based on Barcelona's away kit to which Mr A took a fancy too and said 'I want one."

My birthday is up in just under a month I have instructed my family that "I want one too." LOL

The fixtures for the new Premiership season were announced this week and Chelsea have a home game to start the season against newly promoted Birmingham City.

Results that can be repaired quite easily if defeats come our way!!! Dont't forget we only lost 3 times last season and still lost the title!!!

Ben Sahar's European adventure with Israel is over after Israel lost to Portugal 4-0 in Holland last night.

Tonight England need to beat Serbia to guarantee qualification for the U 21's semi-finals after two disappointing draws against the Czech Republic and Italy.