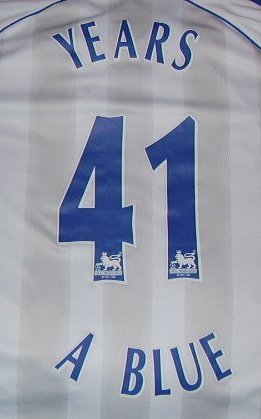 The inevitable finally happened. After months of playing catch-up the title finally went to Man Utd, after Chelsea could only draw at the Emirates Stadium on Sunday afternoon in a game they had to win.

Wednesday night at the Bridge should be a cracking night of football now that the Premiership race is over. Jose has promised that his Chelsea players will form a guard of honour for the Champions and I hope that the players will not be to downhearted to work for three points and become the first team to beat the new Champions.

As soon as it was announced that Didier and Ashley Cole were not playing, I knew that Jose had 'given' up the the fight so to speak. But the team didn't and hadn't. Despite losing Khalid 'The Cannibal' to a stupid challenge which saw him get the red card and Arsenal taking the lead from the resulting penalty, it was difficult sometimes to see which team were down to ten men in the second-half.

Chelsea battled and battled and finally got the goal they deserved twelve minutes from time, when Man of the Match Michael Essien flashed a low header past the struggling Lehmann to make it 1-1.

Going on the attack for FOUR different trophies was always going to take its toll and with only the Carling Cup to show for their efforts so far........... the FA Cup NOW looks so important.

Wherever you are in the World. Let the snipers have their potshots, let the critics write their 'critics,' just ignore them, puff out your chests, hold your heads up high and shout WE ARE CHELSEA!!!