From Stamford Bridge to Boundary Park

Share All sharing options for: From Stamford Bridge to Boundary Park 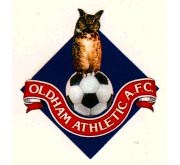 As Chelsea do not play until Sunday and lets be fair the Premiership title could all be over if ManUre beat City on Saturday lunchtime, and if you are looking for something to do or a team to support for two hours, why not drop down to League One and give Oldham Athletic a go?

Why, I hear you ask?

Well. A business supplier of mine I have known for a couple years is a die-hard Latic. A real Latic, not a psuedo-Latic from up the road in Wigan. His two kids are die-hard Latics fans and they travel all over the country watching their beloved Oldham Athletic play. Now for me this man and his kids form part of the 'true' football fan club, to which I wish I could belong to.

His family are all Man Utd fans but he broke with family tradition and supported his local club. Throughout the last two seasons we have discussed loads of football topics but we have had respect for the clubs that we support. The banter between a Northerner and a Southerner has been wonderful as dinner is lunch and tea is dinner.

Last season when Chelsea played Liverpool at Old Trafford in the FA Cup semi-final, he let me park my car at his business premises and we met before Latics home game with Swansea (ironic really that Swansea could break Latics hearts on Saturday) and he took me into the Oldham pub behind the Chaddy End of Boundary Park with me and my boy wearing Chelsea shirts and no-one batted an eyelid.

Oldham are at home to an already relegated Chesterfield at Boundary Park on Saturday. Swansea who are the only team able to 'nick' the last play-off position from Oldham are also at home against Blackpool who are still in contention for an automatic promotion spot.