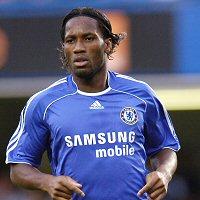 Although Chelsea finished 2nd in the Premiership, albeit with a whimper with five draws in their last five games, Chelsea DO have two reasons to celebrate.

First, Didier Drogba scored more goals than any other Premiership player and therefore finished up with the Barclays Premiership Golden Boot with a final total of 20 goals (32 in all competitions) with the FA Cup Final still to come.

Second, 63 League games unbeaten at home, a record never known by any Chelsea supporter at anytime during the 102 year history of the club. Liverpool fans will say that we 'have no history.' Well that argument can be put straight in the dustbin, where the 'Scouser Scum,' look for their dinner. Now we have a wonderful chance of taking something away from Scouseland.

I await with so much anticipation for the release of the 2007/08 fixtures (sometime in June) and I AM WISHING that our first game at home is against the Scum, so we can take the all-time record away from them!!!

Back to Dider's acheivement in claiming the Golden Boot, the first Chelsea player in five seasons to score 20 League goals or more. Didier said "It is the first time since I have been a professional that I have finished the top scorer and I think there is a lot to be proud of because throughout the year, I have difficult moments."

"But I kept believing in myself and my fans because they always helped me and this season I was a bit more lucky than the others."

"The goals I missed last season, now they go in and when you are a striker, the differences are very small. You need a bit of luck as well."

"Maybe I am more happy. I feel more at home."

Tuesday night sees the announcement of Chelsea's Player of the Year as voted by the fans. The announcement will be made between 9.30pm and 10.00pm (UK time) and as soon as I know the result, I will announce it here!!!

My player of the year is Michael Essien. Simply because of all the work he has put in for the team in all the different positions he has played and the important goals he has scored ie the two equalisers against Arsenal.

I know Essien has scored two 'own goals' during the season, but at least he was in the defensive positions to 'score' them.