Share All sharing options for: Chelsea 0-0 Man Utd OR 'The Graham Poll Show' 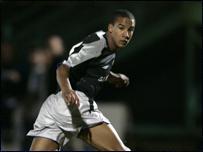 We hardly spoke on the way up to Fulham Broadway, one I was knackered from work and I just wanted to catch some zzzz's on the train up to London Bridge and once we hit the tube, it was mayhem LOL - rush hour and all that. One minute we were close in the tube compartment, the next minute I was at one end and he was at the other!!!

I really DO HATE midweek games - I HATE them.

Once we got to Fulham Broadway my first duty was to hand in our renewals for season tickets for the 2007/08 at the ticket office. No problem, simple and straight forward - the guy behind the plastic screen accepted my hand delivered envelope and explained that in the next few days I would receive confirmation of my submission, so happy days.

Off to get something to eat via the cashpoint. Bumped into a few familiar faces, including I think Billy Bluebeat heheheheh - I WILL download your tracks mate - I promise at £2.29 its a steal!!!

As it happens, when you look at the team Utd put out to start the game, the Chelsea squad as one sportswriter put it - "Chelsea should have gone to the subs bench, because thats where the main Man Utd players were sitting."

He had a point.

As for the Chelsea. There was no Cech, A Cole, Carvalho, Ballack, Sheva, Lampard, Drogba, Robben.

And for the game itself.

Scott Sinclair started until he was booted into touch at the start of the second half by Wes Brown and has subsequently broken a bone in his foot.

For me, Scott showed an awful lot of promise on his home league debut and his replacement Ben Sahar was so unlucky not to have 'signed his name in lights,' late in the second-half.

For the last year or so, I have been heralding the names of Scott Sinclair and Ben Sahar and after their respective performances last night, I have no reason to doubt that these two are the stars of Chelsea's future.

But the real star of the show was a certain Mr Graham Poll. Maybe he had an agenda after the infamous game at White Hart Lane back in November when he sent off our Captain inspirational, John Terry.

Had he sent off Mikel I wouldn't have argued. But he should have dismissed as well, Brown for his crude lunge on Scottie and Eagles for his assault on Shaunie Boy.

Up until the start of the second-half Poll was doing alright. He must have realised that he wouldn't get into the news and for every 50/50 challenge on a Chelsea player he let play go on, but for the same on a Man Utd player he blew for a foul.

No wonder Jose was hopping mad on the touchline.

Frankly this game wasn't about Chelsea v Man Utd, this game should have been billed as 'The Graham Poll Show'!!!

Its ironic that I read this morning Jose was bemoaning the foresight of the Premier League and the FA in allowing the scheduling of this fixture on the same day as the FA Cup Semi-Final. I said exactly the same to my 'mini-me,' when we first arrived at Fulham Broadway. And that the authorities as an emergency contingent should have rescheduled the dates of the semi-finals and allowed the fixture to have taken place on its chosen day. Oh how that day could have been so different!!!

Surely the FA and the Premier League employ someone with a bit of sense and nouss to suggest that both these clubs COULD be and were, involved in the tightest Premiership title race for years and challenging to be in the first FA Cup Final at the 'new' and very 'expensive' Wembley.

Now is the time I should start canvassing and putting myself out there!!!