Share All sharing options for: John Terry Back........ Again 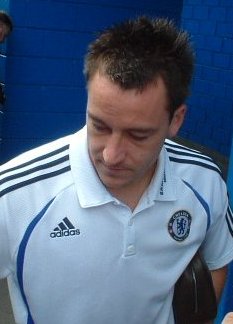 Captain Marvel John Terry trained yesterday for the first time since his horror head injury in the Carling Cup final two weeks ago.

JT joined the squad after they were given the day off after their heroics on Tuesday night.

It is possible that JT will be back in the team for the FA Cup game against Tottenham on Sunday.

Now if you want omens, in TWO successive rehearsals for today's Champions League draw, Chelsea were drawn against Man Utd.

Come back in about two hours for full details of the draw which will include the pairings for the semi-finals.

If you are ever on holiday in or around the Orlando area of Florida during the football season and do not want to miss a kick, then you won't have to if you take a trip to the The Cricketers Arms on International Drive. The Cricketers Arms is a traditional British Pub serving great food has a variety of beers on tap, live music and more importantly the host Phil, is a lifelong Chelsea fan.

All are welcome, no matter who you support.

Mark 21st July 2007 in your diary as this is the date it is expected that David Beckham will make his LA Galaxy debut against Chelsea in a four team world series tournament.