Share All sharing options for: The 'Useless' German Won IT!!!! 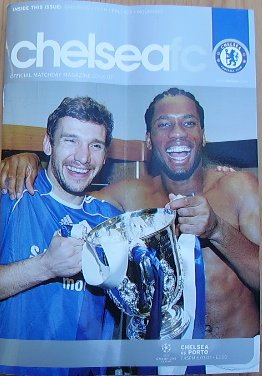 Cheers Bob - You know me too well!!

I am awake nursing a sore head, sore throat and a sore back after my son took me by surprise and jumped all over me when Michael Ballack volleyed Chelsea into a 2-1 lead in last night's Champions League 2nd leg knockout against the Portuguese Champions, Porto.

My seat in the Shed End was spot on. The Porto fans were spot on. They sung all night, they cheered all night and despite their disappointment in defeat, they wanted to exchange souvenirs and shake hands in congratulations.

You are a credit to your club. Well Done!!

As for the 'Useless' German, lets be fair. Ballack has been rubbish all season. OK. He has scored a few goals but his overall contribution to the team has been nothing short of disgraceful.

Here we have the German captain, ex-Bayern Munich's talisman sauntering around the pitch like he owns it, giving away free-kicks in dangerous positions and passing to everybody else except for a man in a Blue shirt.

But last night at an electric Stamford Bridge up he pops with a well taken volley after good build up work from England (Ashley Cole), Ivory Coast (Didier Drogba) and the Ukraine (Andriy Shevchenko) and suddenly becomes a hero.

Where Jose has gone about his business and criticised The Shev, he has publicly lauded Ballack as an 'untouchable,' a player that cannot be dropped although as part of his post-match conference, Jose said 'that Ballack's goal should give him more confidence.'

Jose quite rightly 'laid into the team' at half-time. Chelsea were abysmal, Chelsea were diabolical and Chelsea were behind to a breakaway goal from Porto's danger-man Ricardo Quaresma.

The second half was a different story. Off went Makelele, on came Mikel and balance to the team and style of play was restored. Within minutes of the restart, Robben tried his luck from twenty yards out and with help from Helton, Porto's Brazilian goalkeeper, Chelsea were level.

Then with eleven minutes to go, Michael Ballack 'The Useless German' won it.

Jose said, "We had a difficult half-time with the way I had to speak to the players because at that point we were out."

"Sometimes it is possible to show our quality and show our personality. Can we cope or not?"

Talking about Robben's equaliser Jose said, "A great goalkeeper made his mistake but if we had not scored in the 48th minute we would have scored in the 49th."

"I was always cool. That is the experience of big matches. But I was also aware that Porto were better than us in the first half."

Jose finished off by saying, "It will not be a miracle if we go on to win the competition. We can do it."

Then he said, "It is not true that I want to leave Chelsea. I want to make them one of the greatest clubs in the world by 2014."

The draw for the Champions League Quarter-Finals is on Friday 9th March. What are the chances of Chelsea and Liverpool being paired together again?

I had planned to post some pictures from last night's events at Stamford Bridge especially those of 35,000 Chelsea flags being waved, but it could only happen to me, the batteries I bought for my camera were dud.