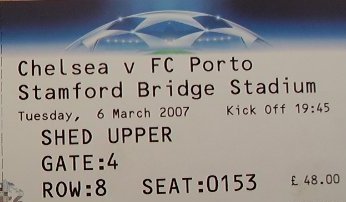 I am so looking forward to tonight's game, not because Chelsea have a wonderful opportunity to progress to the last eight of the Champions League, but for the fact I will be seeing the game from THE SHED END of Stamford Bridge.

The Shed End. The spiritual home for ALL Chelsea fans. Young, Old, Diehards, JCLs, and Plastics. A place where in the 'good old' days where a famous 'knees up Mother Brown' would be performed a place where rival fans would try to 'take!!' A place to worship your heroes on the hallowed turf in front of you.

Nowadays The Shed gets given up to the support of the away team. But not tonight. I have been moved from my season ticket seat in the Matthew Harding Stand because I think the fans from Porto will be situated there. I can't wait to get back into The Shed tonight and I hope the atmosphere does not let me down.

SING UP FOR THE CHELSEA!!!!

With all the injuries that Chelsea have endured this season, Jose welcomes back Khalid Boulahrouz into the squad after injuring his shoulder at the start of the New Year, whether he plays remains to be seen, although with Boulahrouz back, Essien can return to his normal midfield position and give Chelsea that extra power.

John Terry is definitely out.

Part of Jose pre-match press conference detailed that Chelsea deserve more than just winning the Carling Cup. Jose said "We deserve more credit. I think people have to give more credit to poeple like Essien who is not playing in his normal position."

"You have to give more credit to the attacking players becasue they are not in rotation. Last season they were in rotation and every game they were fresh."

"And especially from me, they have all that."

For the results that Chelsea have produced this season and where they are in the remaining competitions with all the injuries sustained this season - I THINK JOSE IS PERFORMING MIRACLES.

Lesser Chelsea teams with lesser managers will have and HAVE crumbled before in the past.