Crespo Back at The Bridge?

Share All sharing options for: Crespo Back at The Bridge? 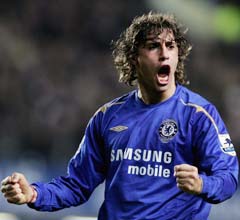 Could Hernan Crespo be coming home?

Hernan Crespo maybe coming back to Chelsea at the end of the season accrording to his agent, Fernando Hildago.

Hildago said "Chelsea seem to have the intention to take him back to London," Hidalgo told Corriere dello Sport.
"If this was the case there would be nothing to do, due to the fact Roman Abramovich's side own the player.

"They have only loaned him for two seasons to Inter. Should in June they want to to take him back, then they will not be leaving him in Italy for a second year."

Crespo currently on loan at Inter may be tempted to move back to Stamford Bridge as reports in Italy suggest the Chelsea will extend his contract to 2009 as a sweetener for moving back.