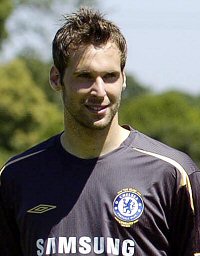 Whether Chelsea retain their title and win it for a third successive year remains to be seen, but the CHAMPIONS are not giving up their title without a fight.

Goals from Didier Drogba and Salomon Kalou gave the boys a 2-0 at Portsmouth's Fratton Park, a game that Chelsea HAD to win after ManUre's 'lucky' result at Anfield earlier in the day.

Fratton Park is quite a happy hunting ground for Kalou. Earlier in the season he scored a memorable hat-trick for the reserves as they thumped Portsmouth reserves 5-0.

The star of the show and Chelsea's saviour was goalkeeper Petr Cech. Cech made two fabulous saves in a five minute spell late in the second-half when Portsmouth were at their most dangerous. First Cech parried and clawed the ball away from a Cole header whilst diving the 'wrong' way and then minutes later Cech swooped down low to his right to keep another header from Kanu from crossing the line.

After, in the post match conference Jose made the point that having Petr Cech about would earn Chelsea the right to ten to fifteen points a season.

Jose said "With Petr Cech in the goal all season, how many more points would Chelsea have?" He carried on by saying, "They (Portsmouth) have two good chances and Petr Cech has to say I am here and I am the best."

"This season I think that too, the second cannot lose points. We are second because we are second. We cannot afford to make mistakes."

For Tuesday's Champions League return against Porto at Stamford Bridge, Jose confirm that Captain John Terry would not play. JT is under strict orders to rest following the kick in the head in last week's Carling Cup final. JT is expected to have another precautionary scan either Monday or Tuesday.