Where In the World??? and Let's Not Forget Europe

Share All sharing options for: Where In the World??? and Let's Not Forget Europe 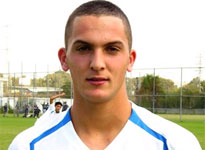 The Premiership and most of the Football League has shut down till next Saturday, purely because of Euro 2008 Qualifiers and qualifiers for next year's African Cup of Nations.

So seeing that Chelsea Football Club represent most of the world - where are mine and your heroes going to be spending most of their time until they are reunited with each other sometime on Thursday and Friday of next week??

The pic at the top of your screen is of Ben Sahar. Ben is hoping to start for Israel and face his club captain and England' captain John Terry. I have seen a lot of Sahar play, especially in the reserves and believe me this boy is a STAR for the future. So if you get a chance, watch out for him.

So if you are in the UK and you are stuck for something to do on Saturday afternoon whilst waiting for the England game to kick off at 6.30pm UK time, then why not check out your local non-league side and pay them a visit. They sure could do with some extra cash.