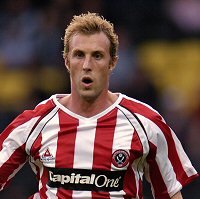 Its never nice to see any footballer get seriously injured whilst plying his trade. Unfortunately this happened to Sheff Utd's Rob Hulse at Stamford Bridge yesterday. A fair challenge for the ball with Chelsea' 'keeper Petr Cech, saw Hulse go down in agony with a suspected double fracture of the ankle.

So I would like to take this opportunity to wish Rob Hulse a speedy recovery (although he may be out of the game for a year). Cech's sadness for striker injury.

For the game itself. As a contest it was all over inside seventeen minutes. As early as the 4th minute The Shev blasted Chelsea into the lead, after a Carvalho 60 yard run and a 45 yard pass which found the chest of The Shev. Shev controlled the ball and blasted an arrow type shot high into Paddy Kenny's net.

Kalou scored Chelsea's 2nd after good work by Shaun Wright-Phillips with an easy tap in and straight away from the restart Kazim-Richards tested Petr Cech with a long range howitzer which Cech did very well to parry the ball away from danger.

Jose set out his intentions that he wants the FA Cup, by relegating Drogba and Ballack to the bench. At half-time Frank Lampard was replaced by Ballack and Ballack scored Chelsea's third with a close-range header from a Shaun Wright-Phillips free-kick.

Drogba and Ferreira got some action, replacing Sheva and Ashley Cole respectively and now after a comfortable victory, we can all move on and look forward to the cup replay tomorrow night.

As for the Premiership title??? Well we need ManUre to start dropping some points!!!